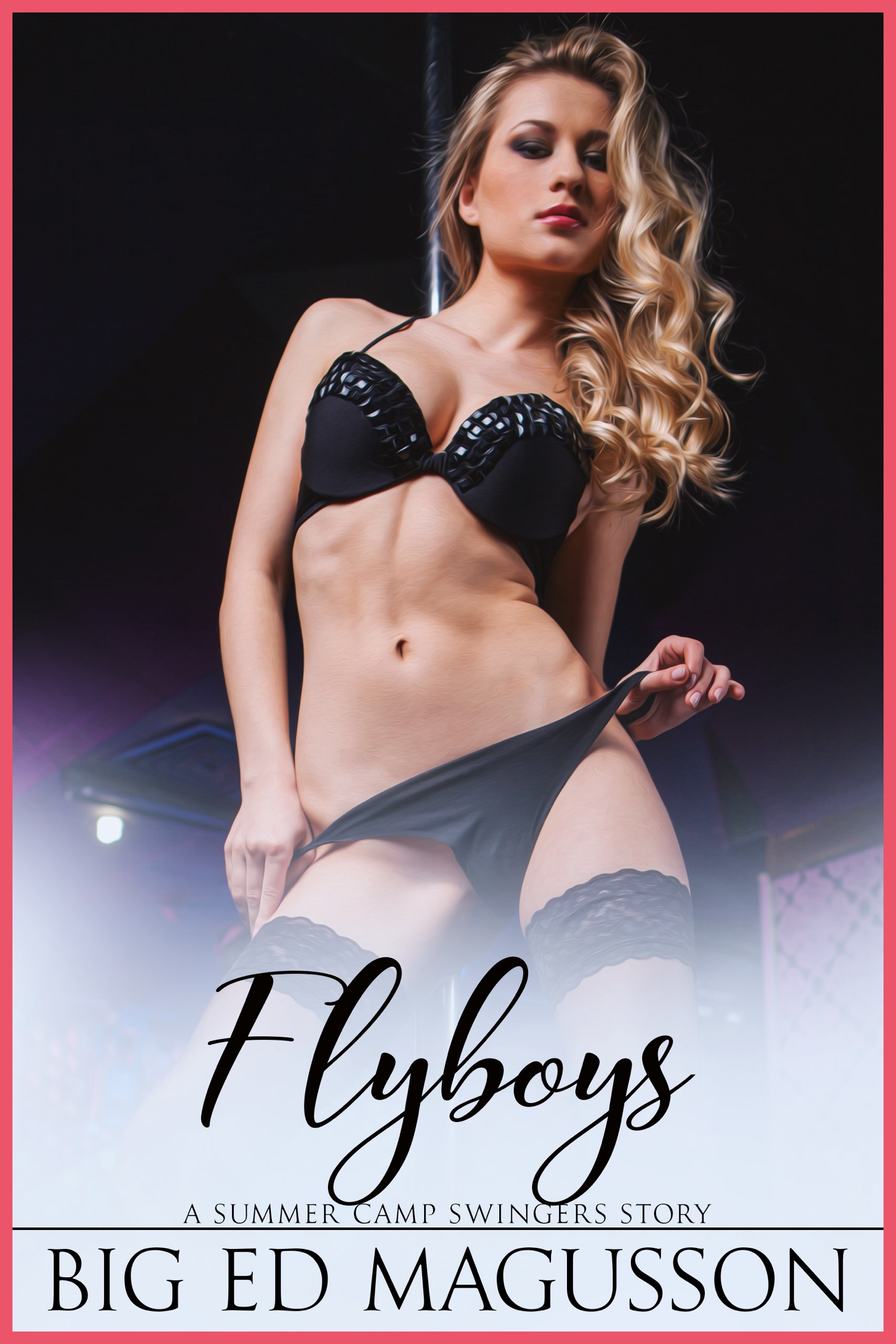 Copyright © 2021 Big Ed Magusson. Summer Camp characters and locations © Nick Scipio, used with permission. All rights reserved, including the right of reproduction, in whole or in part, in any form.

With such a large world, there’s plenty of room for side stories. This is one of them, focusing on Erin in her first year of college at the University of Florida. It helps to be familiar with the Summer Camp Swingers Universe, but this story stands on its own. It takes place in December 1984 after the completion of the Summer Camp Christy volumes.

If you’re interested in more, you can find more of my stories at Big Ed’s Place.

Erin pinched the clips on the report cover closed and leaned back in satisfaction. The term paper was done. Finally done. Now it was all over but Finals. And she had plenty of time for those. She let out a relieved breath and looked over at Jennifer.

Her friend still hunched over her textbook, furiously making marks in a spiral notebook as she read. As usual, her long brown hair had come untucked and half-obscured her face. The only moderately quiet buzz from the rest of the crowd of students in this part of the library didn’t seem to faze her. Jennifer’s concentration didn’t even break when someone knocked a textbook off a table a few rows over.

Erin grinned affectionately. She’d had trouble concentrating with all the extra people around. This spot had been as quiet as it got. Even their favorite private study room was occupied by a group working on some project for their political science class. Jennifer powered on, but then she looked up and blinked.

She wanted… she wanted something different. Someone different.

She rolled her shoulders and neck. She wasn’t as stiff as she’d expected to be. She decided to take a walk. Maybe there were some interesting guys around.

Every study area in the library was crammed. Erin spotted several people who clearly didn’t know each other sharing some of the bigger tables. Girls in sweats huddled in small groups. Guys in t-shirts and jeans had their heads bent over their books. Only a couple of them looked her way, and only two of those smiled. The first one had frat letters on his shirt, on his backpack, and across the back on one of his notebooks. She gave him a pained smile and moved on.

The other guy was cute, in an offbeat kind of way. He had blond spiky new wave hair and a Members Only jacket. Unfortunately, he was also sitting next to a black haired girl, who gave Erin a glare when she saw where her guy was looking.

Erin completed her circuit but didn’t spot anyone else that didn’t just make her think of boys. Overgrown boys. She arrived back at the table with Jennifer as grumpy as before. Jennifer briefly looked up.

“Cool.” Erin started packing up. Thankfully, a few minutes later, they were on their way.

They trudged across campus to the dorm. It seemed colder in the dark, but it wasn't that much colder than during the day. It was still Florida, after all.

“So what now?” Jennifer asked.

“I could use some stress relief,” Erin said with a shrug. Jennifer smirked at the code word.

“Yeah… but Max is busy. Which kinda sucks. And my roommate’s probably home.”

“Mine, too,” Erin suspected. Well, maybe not at the moment, but Brenda’s comings and goings had become increasingly erratic. She’d even started skipping class regularly.

Maybe she’ll flunk out and I’ll be rid of her. Erin felt guilty that she wanted it to happen, but it'd make life so much easier…

“You could take a long shower,” Jennifer suggested. She saw Erin’s grimace and shrugged. “It was just an idea.”

“We could go to a party. I heard about one off campus.”

“Yeah,” Jennifer said. “What was I thinking?”

They shared a grin.

“Yeah, but where?” Erin’s scowl deepened. “Atlanta’s too far. So’s Miami.” Tampa was possible, but it’d take too long to set things up with Val and her first exam was in four days.

“Jacksonville? Maybe one of the bars by the navy base?”

“Pilots? Are they different than sailors?”

“Are you kidding? They’re the cream of the crop. The best of the best.”

“We’ll know them when we see them.”

“We could go tomorrow night.”

“Yeah… yeah let’s do it.” Erin had to admit, maybe a weakness for men in uniform was genetic?

“Think you can wait that long…?”

“Well, maybe you’ll get lucky and Brenda’ll be gone.”

Erin snorted. As if that was likely.

Erin steeled herself in front of her dorm room door. She took a deep breath, put the key in, and turned. She didn’t hear any mad scramble of noise as Brenda and her friends tried to hide their drugs. In fact, she didn’t hear anything.

The room was dark and deserted. After she flipped on a light, she spotted a note on her desk. She read it and laughed. A minute later she knocked on Jennifer’s door. The brunette looked a bit surprised when she opened it.

“Brenda’s gone.” Erin couldn’t resist waving the note. “She won’t be back ’til morning.”

“Donna’s here.” Jennifer nodded back toward the room.

“Come on down?” Erin asked.

Jennifer looked back into the room and pursed her lips in thought. “Gimme a few.”

“See ya.” Erin headed back to her own room

It actually took Jennifer about five minutes before she knocked on Erin’s door. When Erin opened it, she had a towel over her shoulder and quickly came in before Erin shut and locked the door behind her.

“Sorry,” Jennifer said. “I had to wait for a distraction before I could get Bob.” She held up her toiletry bag. Then she looked at Brenda’s bed and frowned.

The thing was a mess. Brenda never made it, and dirty clothes stuck out from under the blankets. A few used Kleenexes peeked out from the pillow.

“Sorry,” Erin said. “I kinda got used to it. We could share my bed. You know, sit at opposite ends.”

“Yeah, that’d work.” Jennifer started undressing. “It’s what my friend and I did.”

Erin smiled and undressed as well. Then she retrieved her own toy from her “grab and go” bag and sat leaning against the headboard. Jennifer took up a similar stance at the foot of the bed, against Erin’s desk that abutted it. She put one of Erin’s pillows behind her back and spread her legs.

Erin’s eyes darted to her friend’s pussy. Jennifer’s labia were already engorged and starting to spread.

“You shaved.” Jennifer nodded toward Erin’s own pussy.

"For Max or Chris? Wait, you’re not gonna see him ’til next week.”

“He doesn’t care,” Erin said, “and Max complained about hair in his mouth.” Which is why she’d decided to shave now instead of when she got home for Christmas break.

Jennifer’s smile soured. “I wish he wanted pussy-eating lessons from me.”

“Ask him,” Erin urged. “He’d love to, if you could figure out where and when.”

That was a preview of Flyboys. To read the rest purchase the book.