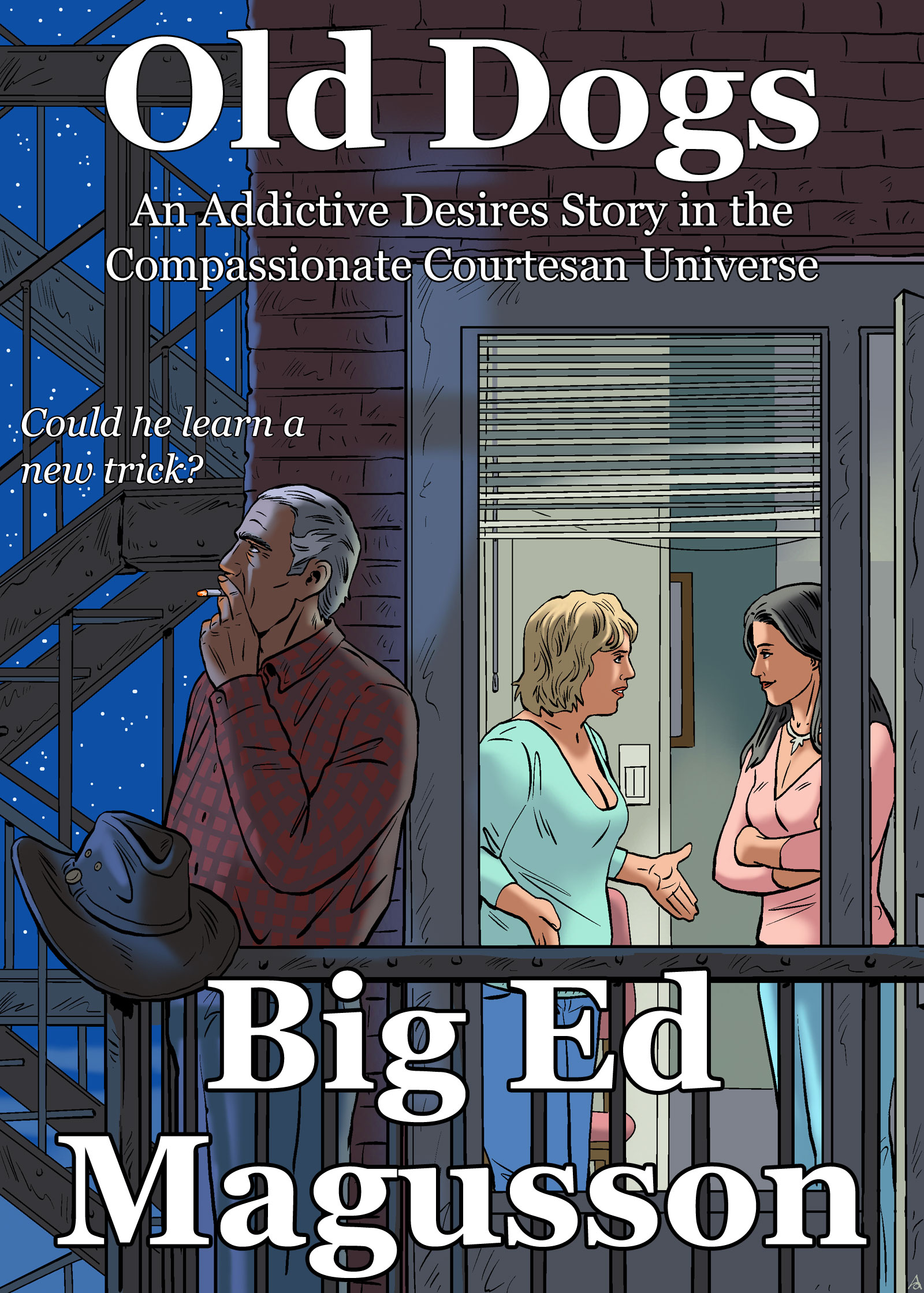 Copyright © 2015 Big Ed Magusson. All rights reserved, including the right of reproduction, in whole or in part, in any form.

I took a long look at the lithe brunette standing in Rose’s cluttered living room. She had old eyes, despite clearly being a third Rose’s and my age. She smiled and offered her hand. I took it, turned it, and raised it to my lips. Her eyes widened as I kissed it.

“Delighted to meet you,” I said.

“Sherri and I attended the same Tantra workshop,” Rose said as she bustled by me toward the smell of cooking beef wafting from her tiny kitchen. “She’s traveling the country and thought she’d visit us here in Austin for a few days.” Then Rose ducked out of sight.

I looked at the poised young lady and raised my eyebrows.

“She told me about your arrangement,” she said, her voice low and smooth. “I hope you don’t mind.”

I pulled out a cigarette and motioned toward the apartment balcony. “Excuse me.”

Sherri nodded and wandered toward the kitchen while I headed outside to smoke and think about what she’d said.

My arrangement with Rose was, well, one of convenience. Every Wednesday, she cooked me dinner and we hung out afterward. Sometimes we just talked. Sometimes we fucked. More often than not, I ended up on the massage table in her spare bedroom to ‘work the kinks out.’

Yeah, she could work the kinks out.

In exchange, I paid for groceries and massage oil and never ever raised the topic of her past in the parlors. “I’m not a whore,” she’d said, each of the few times she’d raised the subject herself. I, of course, agreed.

Yet, conveniently, every Wednesday I paid fifty dollars for what was usually pasta with a salad and sparkling water. Since I’d given up dating, the arrangement suited me fine. But how much had Rose told Sherri about it?

And more important, did it mean no after dinner ‘activities?’

I was pretty sure I knew the answer to that, which sucked because I’d been looking forward to it. I blew a long stream of smoke out at the stars as I imagined they were God’s face. Just my own private fuck you to the universe.

I stubbed my cigarette out in a planter before heading back inside.

Rose bubbled around the small stove, throwing this and that into a simmering pot. Sherri dutifully chopped carrots a foot away. The steady thunk of the knife provided the backing beat to Rose’s sing song voice.

“Why not?” Sherri asked.

Sherri shot me an amused look.

“She’s even thinking about blowing him,” Rose continued, “though he never paid for that, and Norma’d have fired her if she found out. But Norma’d also be pissed if he left angry, ‘cause it’s the angry ones that call the cops.” She swooped Sherri’s carrots into the pot. “Anonymously of course.”

Rose started and seemed to notice me in the doorway for the first time. She giggled. “Because he was gay!” She giggled again. “He came in for a regular massage and didn’t have the nerve to say no when Janie took off her clothes!”

I snorted softly. I’d never heard Rose tell a story about ‘those days’ before.

She pressed three plates into my hand. “Set the table, please?” With a quick turn, she was back to making a salad before I could reply.

Sherri followed me out, bearing silverware. “Shall I get wine glasses?”

I shook my head. “I quit drinking three years ago.”

She raised an eyebrow, but didn’t ask. I stood there, wishing she had.

That bothered me--both my wishing and her lack of curiosity. Just how self-absorbed was she?

She was probably like most young people—sure she knew everything, when what they knew was crap. Rose and I knew how the world really worked. How mean and nasty a place it really was. We’d taken our hard knocks and somehow made it through, mostly standing. Rose more than me. That’s what made our arrangement so comforting.

That was a preview of Old Dogs. To read the rest purchase the book.