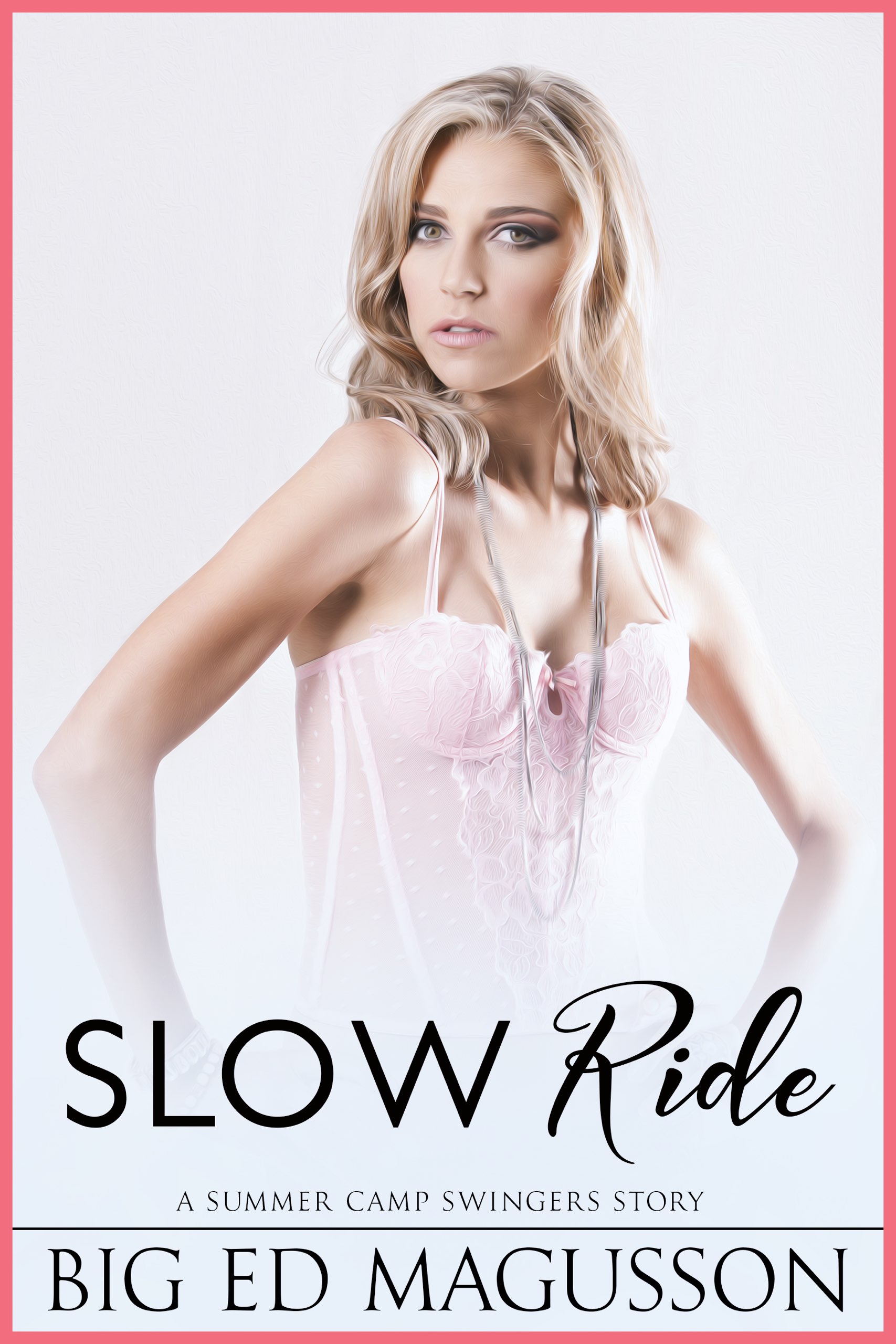 Copyright © 2020 Big Ed Magusson. Summer Camp characters and locations © Nick Scipio, used with permission. All rights reserved, including the right of reproduction, in whole or in part, in any form.

With such a large world, there’s plenty of room for side stories. This is one of them, focusing on Erin in her first year of college at the University of Florida. It helps to be familiar with the Summer Camp Swingers Universe, but this story stands on its own. It takes place over Thanksgiving in 1984 after the completion of the Summer Camp Christy volumes.

Erin leaned back in her seat with a sigh. The stiff wooden back hit her spine in the wrong spot, but she didn’t care. It wasn’t any more uncomfortable than the rest of the little classroom desks, and at least it kept her awake. The stuffy room and the drone of her Poly Sci professor had already claimed two of her classmates. The girl to her left kept nodding forward and then jerking back. A guy two seats up wasn’t even trying. He had his head down and was breathing steadily.

It wasn’t that her professor was boring. Several times his lectures had kept her on the edge of her seat as he tossed ideas around and called on people willy-nilly to contribute. But on the Wednesday afternoon before Thanksgiving, he seemed as disinterested in being here as the half of the class that had shown up.

Erin looked at the clock. The line from the Van Halen song came to mind and she smiled. The clock might be slow but there was no way she was hot for this teacher. He was balding and seriously overweight, but he knew his stuff. Still… she was as eager as the others to get on the road.

Finally, at five minutes before the end, the professor wound up his lecture. He surveyed the class and his eyes fell on the sleeping boy and he frowned. Then he looked up at the rest of them.

“As a reminder,” the professor said, “you should have chapters twelve and thirteen read by Monday. I won’t be so cruel as to have a quiz then, but Wednesday…?”

The class shuffled at the news and several students began putting their notebooks into their backpacks.

The professor held up his hand. “Shhh,” he said quietly. He pointed at the sleeping student.

“It would be a shame to disturb his nap,” the professor said. “So please leave quietly, and, please, tell the next class to come in quietly.”

“You can all spend the weekend imagining him waking up in Russian Politics instead of Political Theory,” the professor said. “I’m sure the next class will have quite the laugh.”

Erin exchanged an amused grin with the girl next to her and quietly gathered her things.

Erin arrived at the dorm with renewed energy. She’d done most of her packing for the Thanksgiving break the night before, so if Jennifer was ready, then in—what, five minutes? ten?—they’d be on the road.

She slowed at Jennifer’s door and knocked. No answer. She knocked again. Still no answer. That was odd…

She knocked a third time and when Jennifer still didn’t respond, she grumbled quietly in frustration and headed down to her own room.

When she returned about ten minutes later with her suitcase and backpack, Jennifer’s door stood wide open. When Erin poked her head in, the brunette looked up from her open suitcase with a frazzled look.

“Sure,” Erin said. She crossed her arms and leaned against the doorjamb. “Five minutes won’t matter, one way or the other.”

Jennifer let out a relieved breath. She pulled a crumpled blouse out of her suitcase and folded it neatly before putting it back in.

“I thought your three o’clock got cancelled,” Erin said.

“It did,” Jennifer said. Her shoulders tightened and she didn’t look Erin’s way.

Jennifer stuffed some more clothes into her hand-me-down suitcase. She frowned and her shoulders tensed. She glanced at Erin hurriedly, and then back at her suitcase. Finally, she turned and looked squarely at Erin.

Erin laughed. “And I bet you weren’t studying.”

“I dunno… I just…” Jennifer frowned. She looked like she was about to say something else, but bit it down.

“Let talk in the car.” Erin shot a pointed glance at the suitcase.

“Yeah,” Jennifer said. She threw a pair of socks into the suitcase. Then she stared into it and appeared to decide she had everything. She closed and latched it. “Let’s go.”

Erin mashed the accelerator up the ramp to the interstate. Traffic wasn’t as heavy as she’d feared and nowhere close to how bad Atlanta got. Still, the evening before Thanksgiving found the road full of cheap Hondas and oversized Oldsmobiles. Fortunately, it didn’t take long to get up to full speed.

“So,” Erin said once they were at highway speed. “Max?”

“Yeah,” Jennifer said. “I had to get a book. He was there. It was pretty empty…”

“Yeah,” Erin said with a snort. “We’re not dating him, remember?”

“Yeah… but the other times…”

The drove in silence for a while. Erin watched the road carefully. The sun was starting to set and some of the other cars had begun to slow.

“We, um, we, uh, did it in one of the back rooms,” Jennifer said after a bit. “The ‘staff only’ rooms. He told this girl, another librarian, to keep watch.”

“But she knew what you were doing,” Erin smirked.

“Yeah, but she’d kinda done the same with her boyfriend. I think she was more shocked that it was Max.”

“Yeah,” Jennifer said with a grin. “I almost told her how good he was, just to see her expression.”

“Oh, I'd love to be a fly on the wall if you ever do that. Oh, I know! Maybe we could do it together in the back room instead of our usual place. Have his friend keep watch.”

“Both of us? That’d totally blow her mind.”

Jennifer smiled. The tension left her shoulders. After a bit, she snorted softly.

“I never figured how much I’d like it,” Jennifer said.

Erin steeled herself, expecting Jennifer to ask for details, but the brunette just turned and looked out the window. They drove in silence for a while. Jennifer seemed a bit restless, but traffic had hit an unexpected slowdown and Erin had to pay attention to the road.

When the traffic started to spread out, they pulled up alongside a semi truck labelled with the name of a major moving company. Traffic ahead wasn’t quite clear, so they drove alongside it for a little while, until the driver honked his horn.

That was a preview of Slow Ride. To read the rest purchase the book.