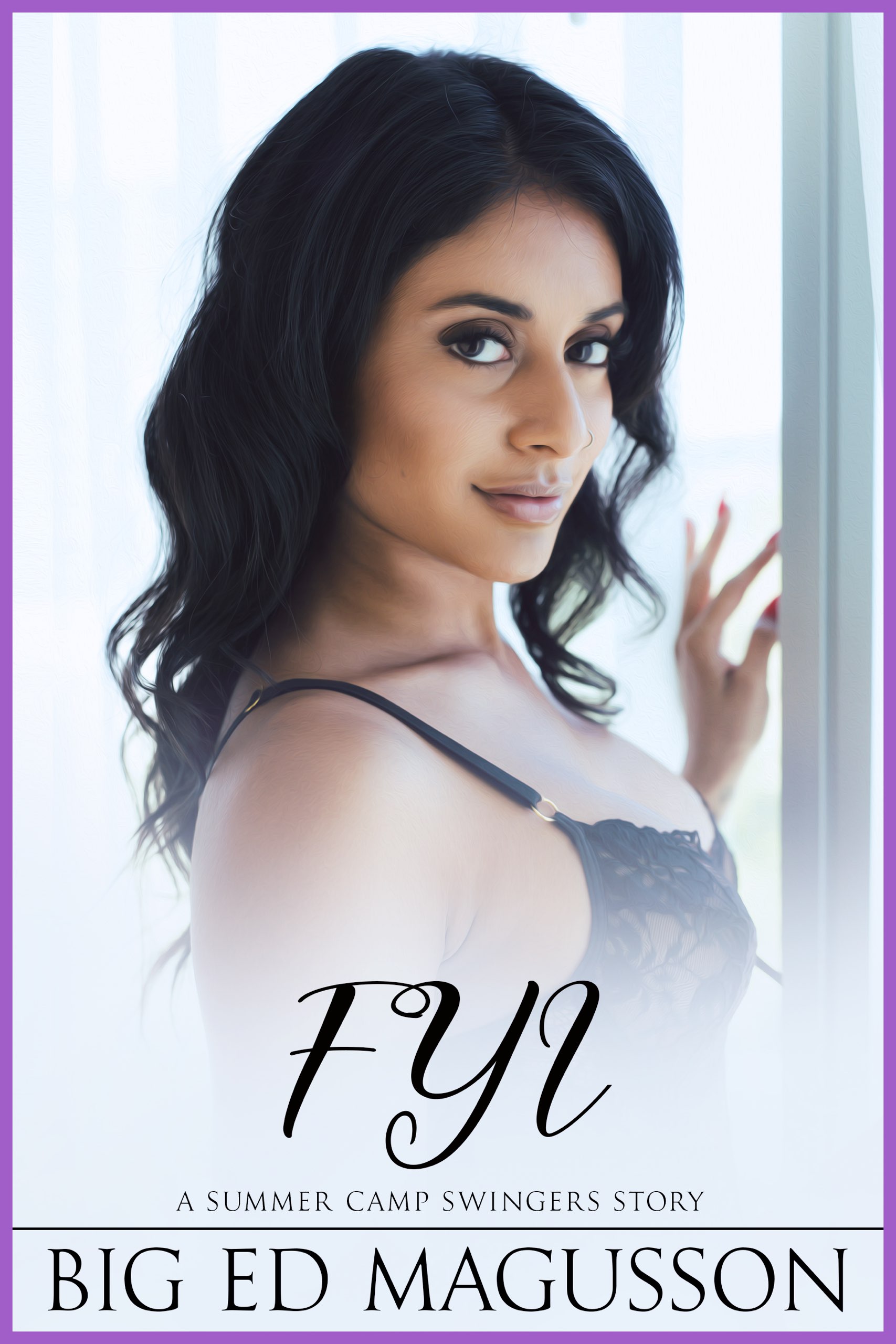 Copyright © 2011 Big Ed Magusson. Summer Camp Swingers characters and locations (c) Nick Scipio, used with permission. All rights reserved, including the right of reproduction, in whole or in part, in any form.

Chris let out a heavy sigh. He poured himself a scotch and then paused. Then he poured some more. So what if it’s the middle of the afternoon? It’s been a long week.

He wandered into the living room looking for his current mystery novel, but paused. The girls were out by the pool, taking advantage of the warm spring day to soak up some sun. They’d picked lounge chairs that were almost directly in front of the window to lie on. Their nude bodies glistened in the sun, though there must have been a cool breeze because of the way Gina’s nipples stood erect.

Chris smiled. He’d come home late a night or two earlier to discover Erin sitting on the couch with Leah kneeling on the floor before her, going down on her. He’d been too exhausted to do more than wave on his way through the room before going upstairs and collapsing in bed.

His dick twitched at the memory. I probably could’ve stayed to watch, he mused, if I hadn’t been so tired. Damn Reagan and his Star Wars!

He swirled his drink and frowned. Reagan’s surprise announcement of his Strategic Defense Initiative had sent the entire station scrambling. Ted wanted experts of all stripes in front of the camera immediately, and it had been Chris’s job to make it happen. He’d had to absorb a lot of military strategy, physics, and science in the past few days.

I could almost be a rocket scientist myself, he mused. After all, I have a long cylinder that rises up and explodes.

He laughed quietly at his own joke, but then frowned. Things were better with Elizabeth, but he still had trouble with that ‘rising up’ sometimes. He knew why, but knowing why didn’t matter. Too much had simmered below the surface for too long, and now that it had bubbled over, he wasn’t sure how to clean all the muck away.

Beth and Susan had helped. Not only had he had several good conversations with both of them over the last couple of weeks, but they’d demonstrated rather conclusively that there was nothing wrong with him, sexually. All his plumbing worked just fine, thank you.

They’d also demonstrated that it worked just fine with Elizabeth. He smiled at the memory. He’d come home the day of his birthday to find the three of them kneeling in the living room in see-through harem pants and tops that Susan had found somewhere. Elizabeth said his present was to be pampered, pleasured, and screwed until he passed out in bliss. They’d managed that, he recalled with a grin. And Elizabeth had been gratified that he’d saved every load of come for her.

No, the rest of the time, it was just the muck getting in the way. And he couldn’t exactly ask Beth or Susan to join him and Elizabeth every time.

He snorted softly and shook his head. He’d been a swinger long enough to see what happened to marriages when one of the partners started thinking that way. No, he needed to patch things up with his wife, one way or another.

He raised his glass to his lips and discovered he’d already finished all of his scotch. He stood to get more and realized the scene outside the window had changed.

Erin straddled Leah’s thighs, slowly rubbing suntan oil into Leah’s back and shoulders. The blonde’s own breasts swayed as she worked and a light breeze tussled her hair. She smiled as she slowly ran her hands down the small of her friend’s back and across the top of her ass. Leah turned her head and said something, to which Erin laughed merrily.

As Chris watched, Erin rose enough to allow Leah to roll over. His daughter stretched catlike, and then placed her hands under her head. While sunglasses hid her eyes, she seemed to wear a contented smile.

Erin shared her smile. She poured more oil into her hands and then started rubbing it into Leah’s shoulders and upper arms. Occasionally she dipped lower towards the darker girl’s breasts, but it soon became obvious that those were just teases. A way of saying, “I’ll get to these... in my own sweet time.”

Chris smiled. This could be good.

He obviously wasn’t the only one who thought so. Gina rolled onto her side so she could watch the show. Her dark sunglasses might have obscured what she was looking at, but her free hand now playing with her own pussy made it clear.

Except... except he wasn’t sure he was really comfortable watching his own daughters these days. Leah and Gina had dropped pretty big hints about what they were going to do in the den the night Gina arrived, and Chris had decided that he had to not watch if he was to maintain his boundaries. He’d made a point of mentioning how much work he had to do and how tired he was and then failed to ‘get’ their hints. Given how tired they were the next morning, they’d had a long, intense evening. Meanwhile, that evening, he’d tried not to let his imagination run wild and failed. After tossing and turning beside an oblivious sleeping Elizabeth, he’d crept into the bathroom and gotten himself off. He’d immediately felt guilty, but at least he’d been able to sleep.

That was a preview of FYI. To read the rest purchase the book.