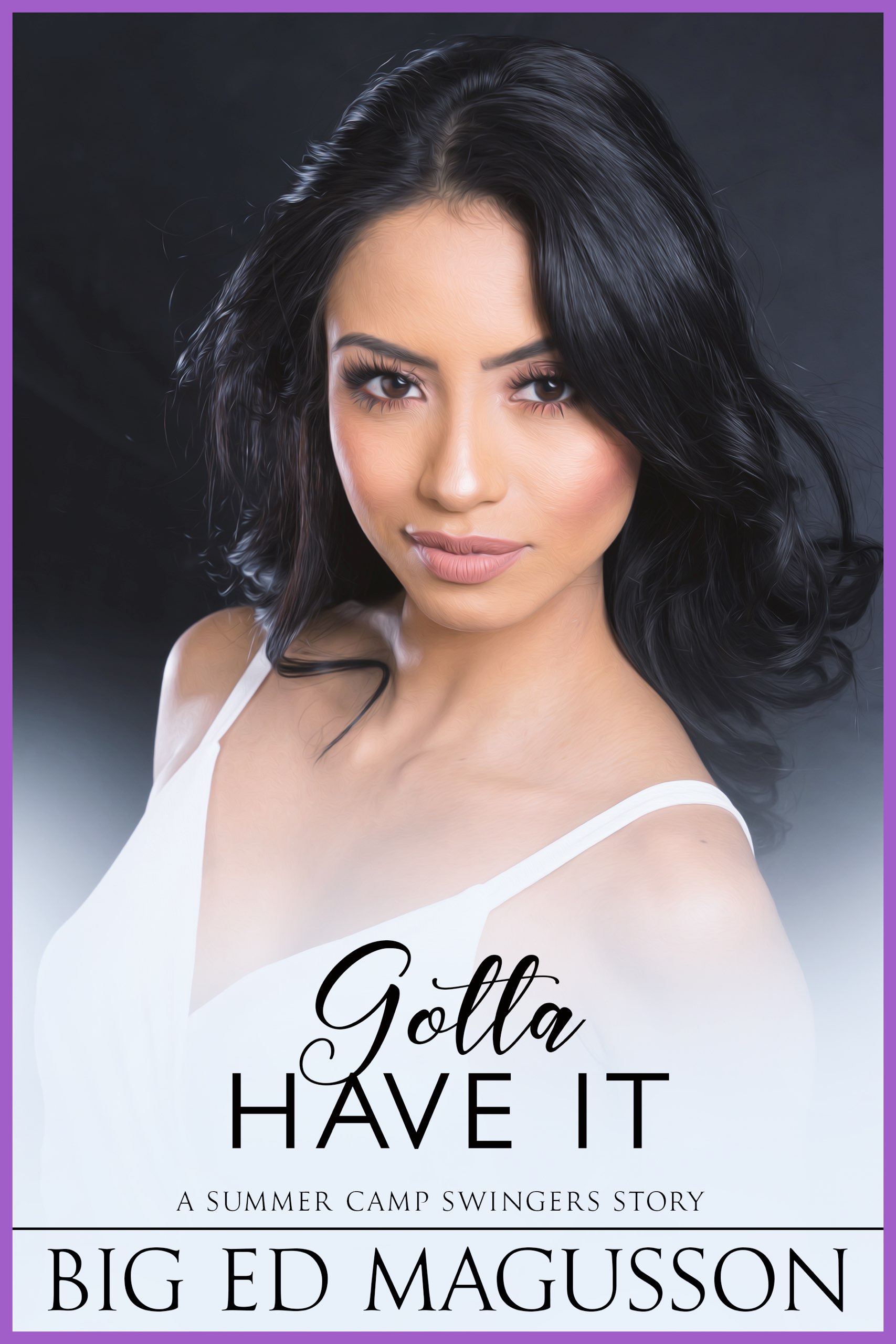 Copyright © 2019 Big Ed Magusson. Characters and Universe © Nick Scipio and used with permission. All rights reserved, including the right of reproduction, in whole or in part, in any form.

This book is a work of fiction. All names, characters, organizations, events, and places are products of the author’s imagination and are fictional, and any resemblance to actual persons living or dead, incidents, or locales is entirely coincidental.

With such a large world, there’s plenty of room for side stories. This one takes place in July of 1983 when Gina Coulter comes to visit The Pines over the Fourth of July. If you’re interested in more of my work, you can find the bulk of the Coulter adventures at my site, Big Ed’s Place, or at my Patreon.

Chris’s smile faded as his daughter Gina emerged from the jetway in the Columbia airport, a handful of steps ahead of her mother Elizabeth. Around him, the people jostled, trying to respect each others’ space while also getting good looks at their loved ones. Fortunately the airport’s air conditioning was working well enough to keep the humid summer heat at bay and the resulting sweat off everyone’s bodies.

But it wasn’t enough to make life pleasant. The blaring intercom announcing gate changes made concentration difficult, but Chris could still read Gina’s body language well. She’d pulled her dark hair back and was in a simple ruffle peasant blouse and pencil skirt, while carrying a small suitcase, but her clothes were the most casual thing about her.

She looked haggard—not at all like a college girl taking a vacation for the Fourth of July. Her eyes brightened when she saw him, but she didn’t smile. Instead, she flowed into a deep hug.

“Good to see you, Princess,” he said.

She squeezed him tight before stepping back. “Good to see you, too.” Her smile looked a little warmer.

She shook her head. “The flight was fine. The last month….”

She gave him a wan smile.

Elizabeth looked a bit more refined in her yellow cotton blouse and dark pants. In contrast, her eyes danced. She gave Chris a long hug and a quick kiss on the lips.

“Missed you,” she said when they pulled apart.

“No longer than some of your business trips,” she said.

Elizabeth glanced at Gina, who nodded.

“Well,” Chris said, “I wanna hear all about it. But first, let’s go get your bags. Hungry?”

Gina nodded. Chris reached for her carry-on, which she handed over. The three of them walked casually and quietly for a while, Chris between the two women. Elizabeth held his free hand.

Chris nodded. When Gina and her roommate Regan had gotten the jobs at the clinic for the summer, they’d decided to rent a nearby apartment together instead of staying in the dorm. He wasn’t surprised at the resulting friction.

“I used to have a lot of arguments with my roommate when I lived in London,” he said. “He was a regular Felix Unger.”

Gina snorted. “I already live with the mess… I just wish she’d started putting the yogurt back in the fridge.”

“Yeah, that stuff tastes pretty bad when it starts growing.”

She looked at him askance.

“Not as bad as butter,” he joked. “And cheese… I mean, if blue cheese goes bad, how can you tell? Oooh… there’s more blue mold than before.”

Gina rolled her eyes, but her mood seemed to lift a little.

“Worst is when the milk goes bad. You know why?”

“Why?” she said guardedly.

“Because it gets out of control! It beats the eggs and whips the butter! Bad milk, bad milk.”

Elizabeth gave his hand a squeeze and a warm, encouraging smile.

They arrived at baggage claim, but none of the suitcases from their flight had arrived. Elizabeth excused herself to use the restroom and said she’d pick up something at the snack bar.

“We’ll have a full meal at camp,” Chris told Gina.

She nodded. “That’s another thing… Mom said Leah’s not going to be there until after I’m gone.”

“Yeah, we couldn’t get good flights for her, and frankly if your mom is willing for her to stay in Seattle with Mark, there was no way I was gonna object.”

Chris nodded. “I don’t know him that well, but your mother says he’s the best thing that’s ever happened to her. She was beyond impressed after their trip to Florida.”

“She’d have to be, if she’s letting her stay with him in Seattle.”

“She’s really grown up since she started dating him, and she really gets along with your mom now.”

Gina raised an eyebrow. The glint in her eyes implied something naughty.

“Getting along as well as Mom and Kara?”

He laughed in surprise. “No,” he said, “not that well. But they’re not fighting, and that’s a huge plus.”

Gina nodded in agreement. They broke off the conversation as some bags started coming down the conveyor belt, but the first few weren’t theirs.

Chris blinked. While the sisters got along well, there was more emphasis in her voice than he expected. Almost an edge of frustration…

“Well, you, me, your Mom. David and Beth. The usual suspects after that.”

“Have you heard anything about Paul?”

“I’m not sure,” Chris said. “Beth mentioned something about one of the houses they’re working on in Atlanta.”

“No, no I was just wondering.”

Her answer was too quick and it piqued his curiosity.

“I mean, we haven’t talked in months. I guess I want to know how he’s doing. Is that weird?”

“No, it’s not weird at all. You were in love with him once.”

She stared at the horizon, lost in thought for a moment.

“And I’m wondering if I ever got over him,” she finally said.

“Well, it would’ve been hard with you in L.A. and him in Knoxville…”

He just smiled knowingly, even though he had no idea what the other things were. She’d tell him in her own time, if she wanted.

The women’s bags appeared just moments before Elizabeth reappeared with snacks and three Cokes. They headed over to the field where Chris had parked the Cessna that they jointly owned with the Hughes.

Once there, Chris preflighted the plane while Gina and Elizabeth talked. Elizabeth suggested Gina take the copilot seat, so she could nap a bit on the short flight to The Pines. They got settled and Gina looked out the window until they were airborne.

“Still on a cruise with her grandparents.”

“Trish was at camp earlier in the summer, but she’s gone to visit her grandparents. Come to think of it, I haven’t seen Manfred in a couple of years. Though his parents still come. You could ask them if you want.”

They climbed into the plane and Chris had to pay attention during taxi and takeoff. Once they were in the air, he keyed the intercom and said, “So how’s work?”

“It’s okay. I’m mostly doing paperwork, but sometimes I get to help the doctors.”

She talked about her job for most of the rest of the flight. Just before they landed, she fell quiet, and then a little tense. She turned and looked at Elizabeth in the back. Chris swiveled his head and followed her gaze. Elizabeth’s intercom headset lay on the seat beside her. She was wearing her Walkman headset and listening to a cassette.

She couldn’t hear them.

“She said things were good, but didn’t elaborate.”

“So the thing with Kara doesn’t bother you anymore?”

“No. I still don’t like how she decided to start things with her, but I’ve come around to the belief that they’re not hurting anyone.”

He snorted. The other men, you mean? “She’s done better about checking in with me before any of the other stuff happens. It’s gone well.”

She perked up more when they landed. As they switched to the station wagon for the drive to The Pines, Elizabeth asked Chris about his work. He brought them up to speed on his projects at the network and all too soon they were at the camp gate.

Chris drove slowly drove to their cabin. Gina looked relieved and began peeling off her clothes. By the time they’d arrived, she was nude and almost antsy in her seat.

Chris grinned. Ready for a long weekend at a nudist camp.

Chris parked next to their cabin and Gina bounded out of the car. As she retrieved her bag from the back, he noted that her normal cheery disposition had returned.

Elizabeth slipped next to him and gave him a hug. He kissed her cheek. She shot him a sultry smile.

Who’s gonna do some serious ‘picking up’ with his wife tonight!

They quickly unpacked the car and settled their things into the cabin. Then Gina said she wanted to talk to Elizabeth. They looked serious, so he decided to give them some space and read on the porch for a while.

After that, they enjoyed a pleasant family dinner in the clubhouse, during which they talked with the Erikssons and learned about Manfred’s life in college, where he was studying ecology. As they cleaned up, Gina turned to her mom.

Elizabeth chuckled. “By all means. You know where it is?”

Gina blushed. “That should be plenty.” She excused herself and nearly scampered out of the clubhouse.

“So what was that about?” Chris asked.

The night was dark and quiet as they headed down the path. Chris held Elizabeth’s hand. She smiled at him and waited until some other campers had passed by.

That was a preview of Gotta Have It. To read the rest purchase the book.

Add «Gotta Have It» to Cart