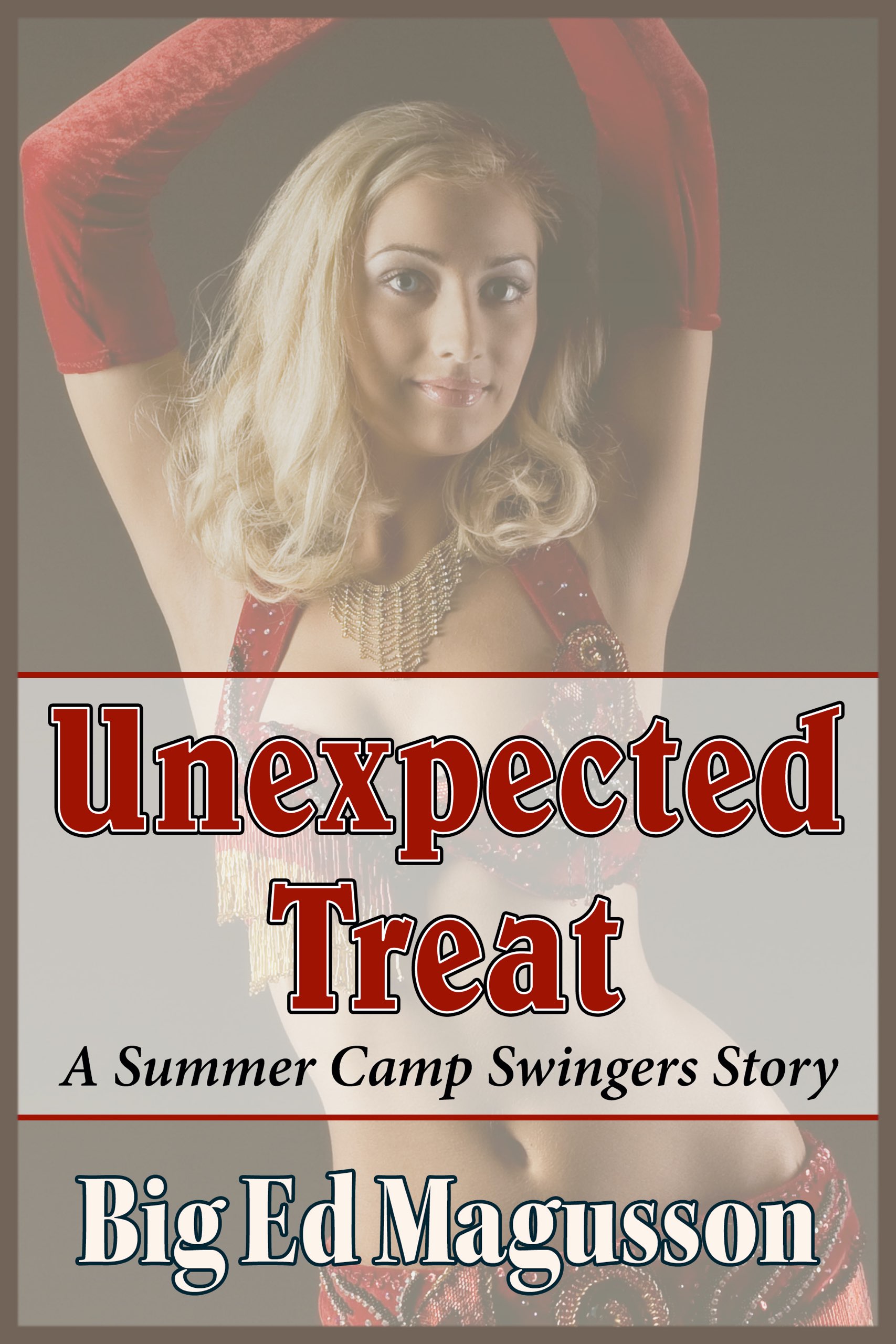 Copyright © 2020 Big Ed Magusson. Summer Camp characters and locations © Nick Scipio, used with permission. All rights reserved, including the right of reproduction, in whole or in part, in any form.

With such a large world, there’s plenty of room for side stories. This is one of them, focusing on Erin in her first year of college at the University of Florida. It helps to be familiar with the Summer Camp Swingers Universe, but this story stands on its own. It takes place on several dates in September after the completion of the Summer Camp Christy volumes.

Erin stretched and then rolled her shoulders back. The ache in her upper arms led her to shake them, and she even pushed away from the library table while she rolled her neck. She heard low voices in the distance, but her study mate didn't look up. Instead, Jennifer hunched over her notepad and continued scribbling furiously. The distant hum of the air conditioning was only broken by the clatter of someone walking down the nearby stairs.

“What?” Jennifer said. She flipped a page in her textbook instead of looking up.

“The library closes in twenty minutes.”

“Yeah. I think I’m done for the night.” Erin closed her notebook and started gathering her things.

“Sure. I’m gonna go to the bathroom.”

Jennifer nodded and buried her head in her book again.

Erin pushed her chair back and stood. She looked at Jennifer and smiled. The brunette’s long hair cascaded around her face, making a veil that hid her features. It swayed as she moved her head back and forth, reading.

As Erin walked down the hall, one of the library staff pushed a cart full of books toward her. The staffer, a short curly-haired guy about her age wrestled with the cart’s steering. One of the front wheels wasn’t turning on its caster correctly and he looked like he was about to curse.

“That doesn’t look fun,” she said once she was close enough to keep her voice down.

He looked at her in quick surprise, turned his head away in a flash, and then brought it back to give her a worn smile.

“Yeah,” he said. “They need to take it out of circulation. Except it’s a circulation cart.” He blushed. “Uh, sorry. Library joke.”

“Of course you did,” he said. “You’re pretty smart. Well, uh, you know that. I mean, god, I can’t believe I said that to someone as hot as you.” Then his eyes went wide as he realized what he'd said. He blushed and looked down at his feet. “Umm… sorry. I’m, uh…”

He looked so cute trying not to peek at her face that she couldn’t help but smile. He was a pretty unimposing guy—only a few inches taller than her, but very wiry.

He took a deep breath without looking up. “Anyway… it’s not hard. Most nights it’s kinda quiet. But you know that. I see you here all the time too.” He looked up at her with alarm. "Not that I’m spying you or anything! No! I mean, I kinda just notice…”

“Yeah,” he said with a sigh. “Every Friday and Saturday night. Shelving books.”

Erin glanced back toward Jennifer, who was still deep in her studying.

“D&D? Dungeons and Dragons?” Erin looked at him more closely. He wore thick glasses with black frames that were actually darker than his coal black hair. But the brown eyes behind them danced with insight.

“Yeah,” he said. He shifted his gaze from hers. “We’re, well, they’re having a Halloween party tomorrow night and I’m gonna be here.” He looked forlornly at the cart of books.

He pulled himself together and shrugged. “What’d you say? You’re not here just to party? Me neither.” He shifted his gaze behind her.

“Hi,” Jennifer said as she approached. To Erin, “I’m done.” Then she looked expectantly at the guy. “Who’s your friend?”

Jennifer shook it. “Nice to meet you, Max. I’m Jennifer.”

Erin introduced herself. “But if you’ll excuse me…” She pointed toward the bathrooms.

Jennifer and Max both nodded, and so Erin slipped off.

To her surprise, they were still talking when she returned. Max leaned back against the cart as Jennifer laughed at something he’d said. He looked relaxed, but pushed his glasses back up his nose before he glanced her way.

Erin gave them both a curious look.

“Library story,” Jennifer said. “I’ll tell you later. We should get going.”

“Yeah, I gotta get these put away.” Max tapped the cart with his hand. “Lots to do before I lock up.”

“All right,” Erin said. “Sorry about your party.”

He gave her a resigned shrug followed by a casual nod. Then he started pushing the cart once again.

As they gathered up their things, Jennifer asked, “So what was that about a party?”

“He’s missing one tomorrow because he has to work.”

“That sucks.” Jennifer paused in packing her books into her backpack. “Say, do you wanna go to one? It’s at that same house off-campus.”

“The one that Gatsby-wannabe owns?”

“Yeah. I know there were some douchebags there last time… but we don’t have to stay if it’s lame.”

Erin shrugged. “Sure. Beats the library.”

They waved to Max on their way out.

The night was surprisingly muggy for late October. Maybe Erin had just gotten too used to the air conditioning, but it felt wrong. Still, it was better than daytime in the South. She shifted her backpack and wiped her brow. There wasn’t actually any sweat there, but it made her feel better.

Jennifer set a casual pace. They walked in comfortable silence until they came within sight of the dorm.

“Probably,” Erin grumbled. “When is she not?”

“Too bad it's Friday," Erin quipped. “So, she's stoned. But where? My room or with one of her loser friends?”

“Donna's gone. You and Otto could come spend the night.”

Jennifer fought back a blush. “We had fun last time.”

Erin agreed with a grin.

“No good dicks around,” Erin said with a grin.

“Tell me about it,” Jennifer said. “Bob and Otto are as good as it gets, I’m afraid.”

When Erin arrived at Jennifer's room, her friend opened the door in just a long sweatshirt that fell to mid-thigh. As soon as she’d locked the door behind them, she stripped it off, revealing she was nude underneath.

That was a preview of Unexpected Treat. To read the rest purchase the book.