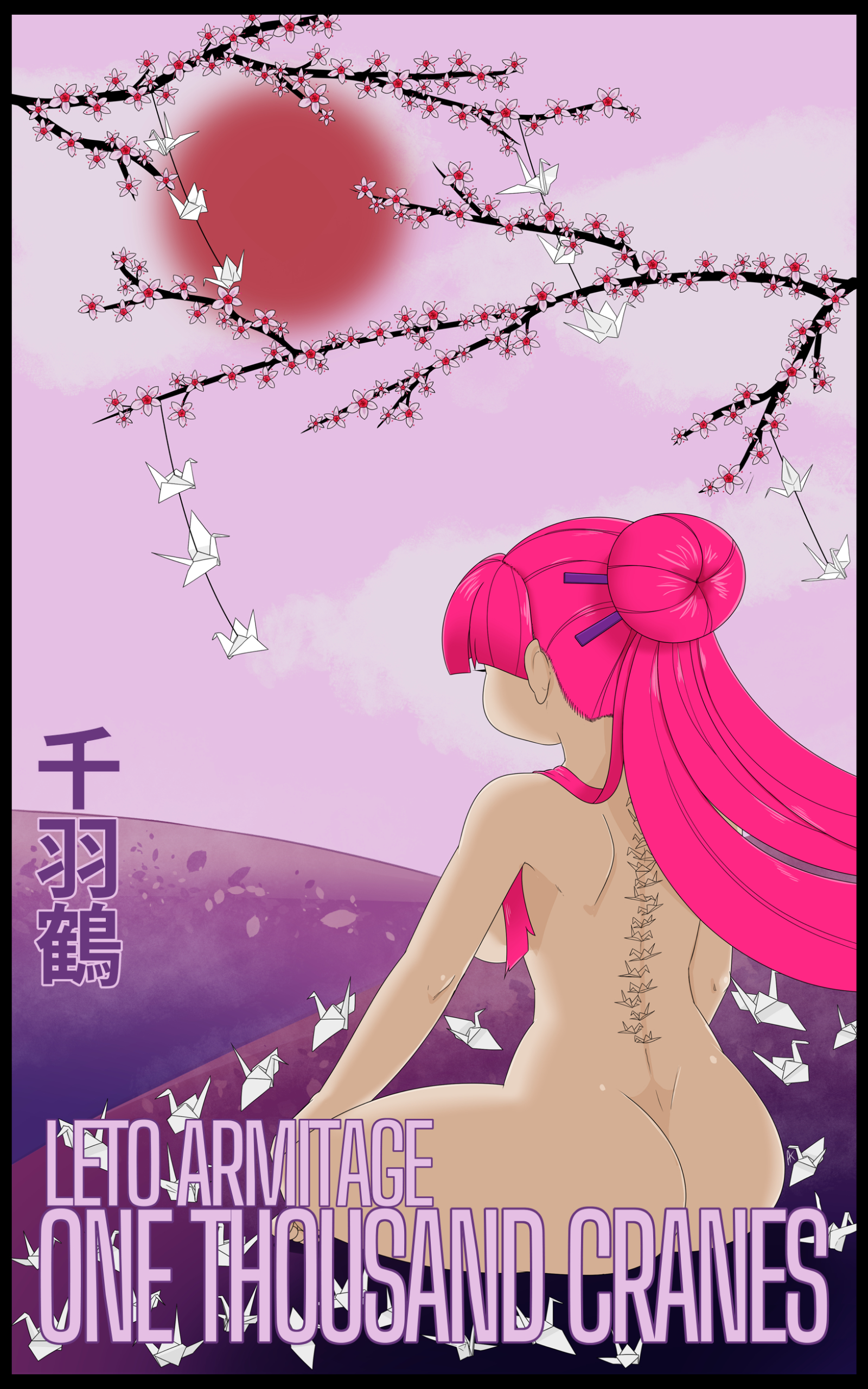 I paused, the needle hovering over Sakura’s back.  “Sanctimonious?”

“Not you, this asshole I work with.  I screwed up the other day and he can’t let it go.”

“Oh.”  I returned to the task.  Somehow I had thought she had meant the pricking of the needle.  Most customers were focused on the tattoo when they came in but Sakura’s mind never went where anyone else’s did.  I pushed again, inserting the indigo ink under my old friend’s skin.  “I wish you'd let me use modern tattooing equipment.”  The needle stabbed over the spine, a dark blue, black for most purposes, line taking shape.  I firmly gripped the bamboo handle.  How she didn't scream bewildered me.  It wasn't a gentle process and the skin over the spine was sensitive.  “It wouldn’t hurt so much.”

“It's supposed to hurt,” came the same quiet reply.

I keep my hair short in a bob so it never falls in my eyes.  In contrast, it always seemed like I was moving Sakura’s long hair out of the way.  Sakura was first-generation American-Japanese with hair as dark as mine but she had bleached it until it could take an electric pink dye.  At 5’3” and a feather over 100 lbs she was a tiny thing.  I had always towered over her at 5’8” but on the repurposed massage table she was just like anyone else who came into the tattoo parlor.

The shape of the newest paper crane slowly formed.  Each crane was distinct with a continuous line of drawn string connecting it to the others that began at the base of Sakura’s neck.  Her hair usually covered them.  There were nearly two dozen of the birds.  In a way, they were a map of my tattooing career.  I never imagined where things would go when I'd bought my first stuff off Craig’s List.  I barely got out of the creep’s house without being molested.  I sterilized the hell out of everything in the box, figured out how to fix it, and began giving friends tattoos without a license.  It had been pretty damn dumb of me but it became a career.  There might be some awful tattoos floating around out there from my early days.  I hope they have been covered up.  Over the years I’d lost track of everyone from our school days but Sakura.  It seemed like no matter how little attention I paid she was still in my periphery.  I’d not hear from her for a few weeks but then she’d be telling me to come over for dinner and we’d spend the night scarfing junk food and playing video games just like we were back in high school.

Not that Sakura had let me use the tattoo gun on her back when we were fourteen.  That was the same year that Mikey Rhodes took my virginity.  Now that was a sanctimonious prick.  It hadn't been long after that when Sakura showed up with a wooden box her grandfather in Japan had sent her with irezumi equipment. She had insisted in that way she had that I could never refuse.  The first ones weren't good.  I begged Sakura to let me do them somewhere less visible but she had insisted they start there, at the base of her neck.

My mind went back.  “You remember your mom seeing these the first time?”

Sakura laughed gently.  “Yeah, the swim party when my hair was in a braid.  She thought I was joining the yakuza.”

“You only had what, eight or nine then?”

“Eight.  I got the ninth two months later.”

That was Sakura.  She could be cute but she was always so serious, except when on the table in pain.  Here she seemed serene.  Each bird was a milestone but I still didn't understand how.  The times she picked to get them seemed random to me.

“I met Kris at the pool party.”  I looked at it, the wings spread out horizontally and flat so they were symmetrical and parallel to her spine.  “God, I can’t even remember his name.”

“Mulbranch,” Sakura supplied.  “You were stupidly happy.”  Sakura’s voice was faint, like on the edge of sleep.

“I was an idiot.  He was a tweaker and I believed him when he said he'd stop.”

“Love is foolish but beautiful.”  Sakura’s hair fell around her.  You're the beautiful one I thought.  If you didn’t give off that remote vibe boys would be all over you.  Me, I'm the plain one.  Hell, even being a short tiny Japanese girl you have more curves than me.  Helen, my namesake supposedly was the most beautiful woman in the world.  I tried to make beautiful things but I and my life were just a mess.

I returned to an old subject.  “If love is so beautiful why don't you get out there?  Doesn't your mom want you pumping out some kids?”

“She has my brother for that.”

“They're a wish,” Sakura said, raising her voice just a little.

“So, like each one, you get one for luck for something?”

Sakura, “No.  One wish, when there are a thousand cranes the gods will grant me one wish.”

“Maybe my wish will come true on its own before then.  If so I won't have to continue.”

“I've read about this some since we began,” I said.  “Usually they're origami, you fold a thousand and then hang them up and let them disintegrate.  Tattoos are, just sayin’, a bit extreme.”

Sakura responded in that same monotone she always had when under the needle, talking as if from far away.  “My grandmother puts out saki at the temple for good weather.  The saki evaporates but weather comes and goes.  The gods demand you offer something appropriate so this has to be permanent for a permanent thing.”

It was weird.  Sakura was an atheist.  Her Japanese was rough.  I had never known her to care anything about her heritage until the day she asked me for this.

I lifted the needle up and took a breath.  I had to push over and over and it required very precise repeated control.  This was insane.  People practiced this technique for years and Sakura would just show up out of the blue and it could be ages since I'd last done it so I had no muscle memory for it.  But, I did it.  “You could at least let me do this on your thighs where it won't hurt as much.”

“Well, I appreciate the company.  It's been slow tonight.”

“Because Diej is half black or because he's half Latino?”

That was a preview of One Thousand Cranes. To read the rest purchase the book.

Add «One Thousand Cranes» to Cart