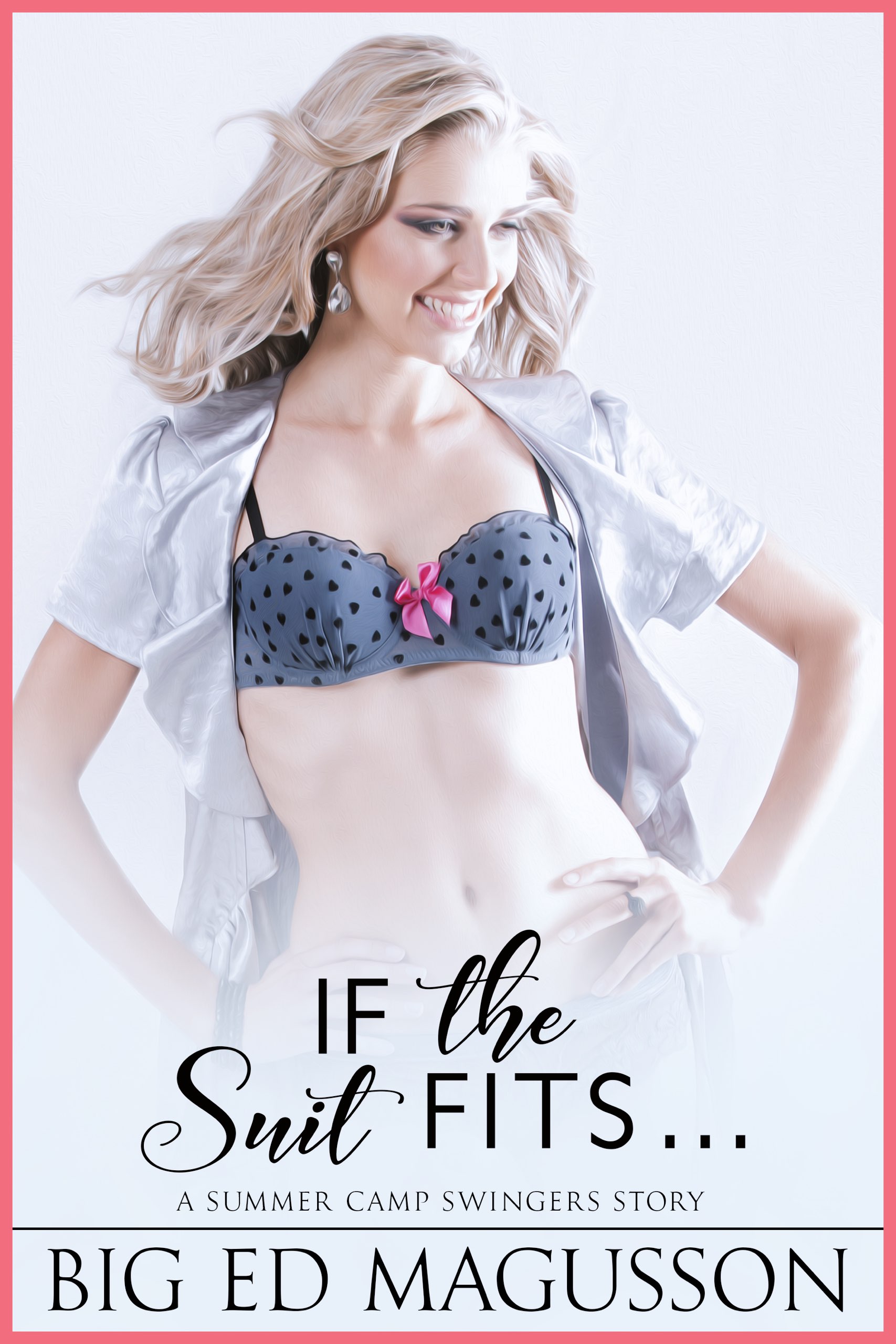 Copyright © 2013 Big Ed Magusson. Summer Camp Swingers characters and locations (c) Nick Scipio, used with permission. All rights reserved, including the right of reproduction, in whole or in part, in any form.

Chris paused outside Leah’s bedroom door and grinned. She stood nude at the side of her bed, holding two bikinis, one black and one red. She studied them like they were interview transcripts.

“What?” she said when she saw him.

“You know we’re going to camp, right?” he said, pointing at the suits.

“I still need to wear bottoms.”

She turned and ran one hand down her stomach and over her mound. Her bare mound. “I’m not going to stop shaving.”

He raised an eyebrow. “Even though you’re not going to see Mark all summer?”

“I don’t do it for him.” She wiggled her fingers at the top of her slit and looked up at him and shivered. “I love how sensitive I am.”

“Ah.” He shifted, uncomfortably aware of his growing desire, but not quite able to pull his eyes away.

He furrowed his brow.

“The ones we took before Prom? The special ones?”

“Mark loved them! Can we take more before we leave? So he can look at them over the summer? Maybe some really special ones?”

“I’m not sure those were a good idea.”

“But these are for Mark,” she wheedled. “Not because I’m trying to, you know, seduce you or anything.”

Yeah, right. That was unlikely. But she could be telling the truth.

“It won’t take long.” She cupped her breasts. “He wants a picture of my boobs.”

He set his jaw and shook his head.

“Please, Dad?” She clasped her hands and bounced on her toes, the same way she’d done when she was five. “Please?”

“I still need to get my own packing done, Pumpkin.”

“What about asking your mom? Or Erin?”

She pouted. “I can’t ask Mom. You know that. And Erin’s at the mall. She has to buy a new swim suit.” She rolled her eyes. “Beth says the one she got last week is too skimpy.”

“C’mon, Dad. You gotta! They’re for Mark. I swear!” She struck a pose that was straight out of a showgirls’ lineup. Then she arched her back just enough to push her breasts out.

She did look sexy, Chris thought. And desirable, and eminently fuckable. His dick started to stiffen. It has no conscience.

She dropped her pose and crossed her arms under her breasts.

“Sorry,” he said, “I know you’re disappointed. But if you really need them today, why not ask your mom?” He looked at his watch and feigned irritation. “I’d better go.”

He practically bolted down the hall before she could reply.

In the car, Chris took a deep breath. Coward. Why not just tell her ‘no, it’s inappropriate,’ like last time? Why run away?

That was a preview of If the Suit Fits.... To read the rest purchase the book.