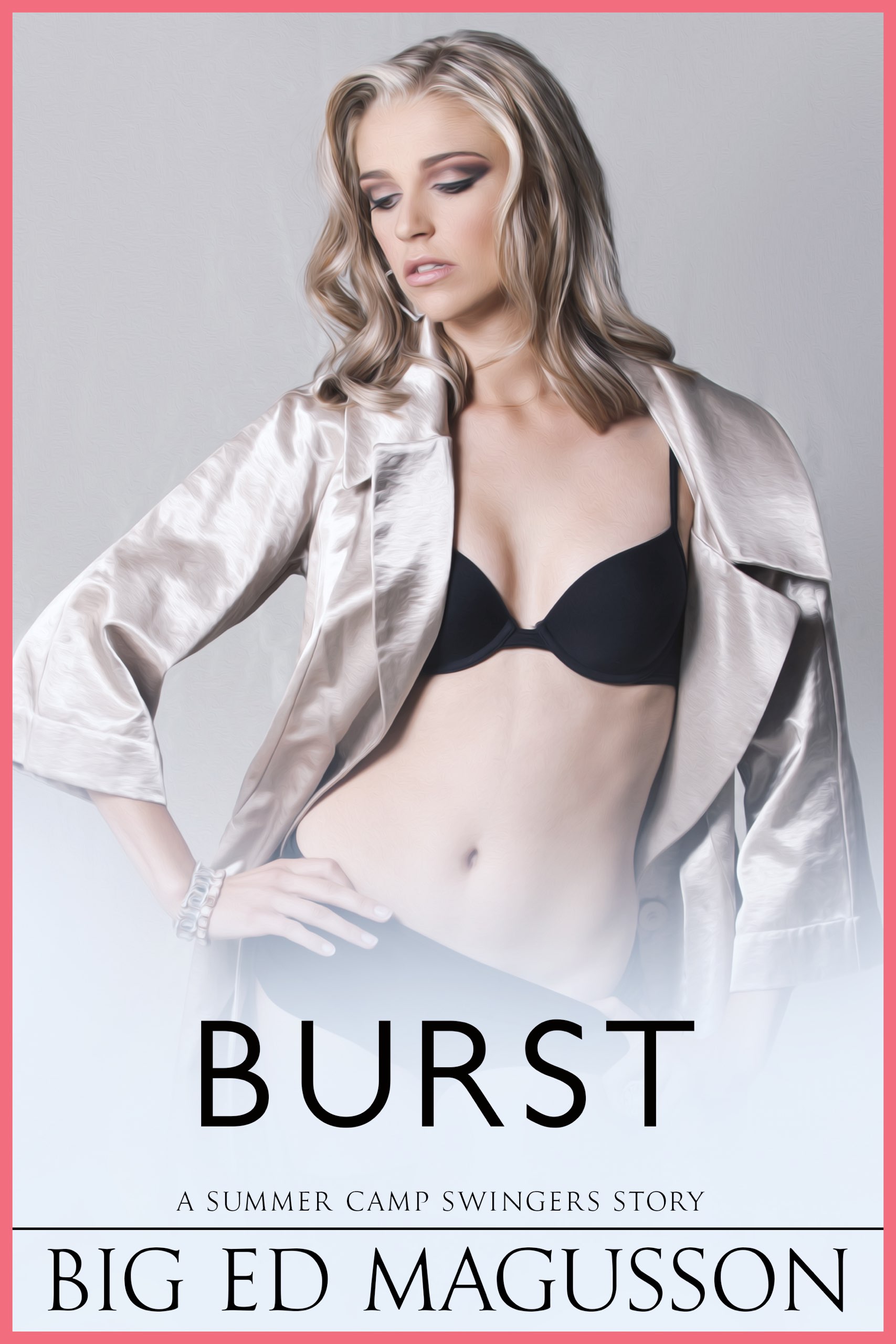 Copyright © 2013 Big Ed Magusson. Summer Camp Swingers characters and locations (c) Nick Scipio, used with permission. All rights reserved, including the right of reproduction, in whole or in part, in any form.

Chris woke up alone. He reached out and caressed Elizabeth’s pillow, remembering. She’s been gone less than a day. Is it silly that I already miss her?

He smiled ruefully. I miss her even when I’m mad at her.

He hadn’t agreed with her choice to go to Victor’s graduation instead of staying in town for Leah’s Prom, especially after all the troubles Easter weekend, but she had done it anyway. Her reasons were logically sound: it was the best chance to meet Victor’s parents, Kara could use some help packing for the move to Atlanta, and it wasn’t like there was much for a mother to do for her daughter’s Prom anyway, other than take pictures.

Leah had said it was okay, but with the same aggrieved tone she used for most of her mother’s announcements. At least they were semi-civil to each other these days. But the tension under the politeness continued.

Chris sighed. He was more on Leah’s side than not these days, but that didn’t change how much he missed his wife, in more ways than one. Saturday mornings had become the one time they’d been able to consistently spend quality time in bed.

So this Saturday, he could stay in bed and remain maudlin or get up and get going with his day. It wasn’t a hard choice. His bladder threatened all sorts of pain and suffering if he didn’t attend to it soon. Unfortunately, his morning erection made that impossible.

He made it to the bathroom long before his bladder would have burst.

The early morning water was cool, just the way Chris liked it. He pushed off the pool wall and let himself glide. Then he rolled over and backstroked the length to the far end. Forty-seven, he thought when his fingers brushed the wall. As he turned for lap forty-eight, he noticed Leah standing on the side. She had on the T-shirt she sometimes wore around the house, which barely covered her butt. She waved. When he finished lap fifty, he pulled himself out of the water, toweled off, and then wrapped the towel around his bare waist. He saw that Leah had brought out breakfast: bowls of cereal, some juice, and coffee. He joined her.

“Once I fell asleep.” Her grin retained the excitement from the night before. “I mean, can you believe it? I actually got to interview the Soviet Ambassador! Dubrinin himself!”

Chris chuckled. It hadn’t been an interview on record—more of an informal discussion after the studio cameras had been turned off. Apparently talking about Samantha Smith’s invitation from Andropov to visit the Soviet Union had inspired the Ambassador. Samantha Smith had just been an average school girl when her letter inspired the Soviet Premier’s invitation. So when the Ambassador spotted another young woman lurking in the back of the studio watching her dad’s production, he asked to speak to her. Leah had hesitated, but she’d overcome her nerves and they’d chatted amiably before she’d asked if she could ‘interview’ him. Then she’d done her father proud.

Leah beamed. “And he answered them! He didn’t dismiss me as some silly American girl.”

“Why should he? They were good questions—intelligent, polite, and they showed you’d done your homework.”

“All those hours watching news shows with you.”

“But you knew exactly when Reagan made his ‘evil empire’ remark, and nearly quoted Andropov’s letter to Samantha Smith.”

“But that’s important. In my business, at least.”

They shared a smile, and then Leah promptly stuffed a spoonful of cereal into her mouth.

She rolled her eyes, but Chris could tell she was still pleased with the compliment. It might not completely offset Elizabeth’s you’ll-be-a-doctor campaign, but it can’t hurt. Speaking of which....

“Umm, so do you need help getting ready for the Prom tonight? I mean, your mom handled things with Kara and Gina, but…” He shrugged helplessly.

Leah shook her head. “No, it’s under control.”

She shook her head more vehemently. “That’s okay. I couldn’t handle her hovering over me anyway. Ugh.”

They shared a small smile.

She shook her head again, but then paused. The corners of her mouth turned up.

“Well, actually,” she said, “I could use an opinion.” She lifted the hem of her T-shirt. “Do you think I need a touch-up? It’s only been a couple of days since I shaved, but a girl wants to look her best. You know?”

Chris couldn’t avoid looking at his daughter’s smooth vulva, but he managed to not stare. Even if he was tempted to. He lifted his eyes to her face. “It looks fine, dear.”

Leah brushed her fingertips over her mound. “But it feels a little rough. Do you think it’ll be okay?”

He chuckled. “I’m not going to give you a second opinion, Pumpkin.” As tempting as it might be...

Her lip quirked, confirming that had been exactly what she’d been hinting at. “Yeah, you’re right. I definitely need to touch things up.”

“I’m sure Mark will appreciate it. He can give you his opinion.”

“Oh he already has. And he’s really good with his fingers.”

Chris laughed. “Too much information, Pumpkin.”

She didn’t deny it, nor did she apologize. Instead, she let her shirt fall back down and took a sip of coffee.

“So,” Chris asked, “what was your favorite part of talking with the Ambassador?”

Chris grimaced. When he’d decided to spend his free Saturday clearing out the old boxes from the back of the closet in his home office, he’d expected to make it further by lunchtime. The first two had contained notes and files from his first years as a reporter and it had been challenging to decide what was still relevant nearly twenty years later and what was destined for the trash. Or to put it in the parlance of his first boss, what ended up in the cabinet and what ended up in File 13.

It seemed like too much of his early life was destined for File 13.

When did I get old? Having two kids in college didn’t make him feel nearly as ancient as throwing out files about the Kennedy assassination. His reporting about the local reaction now felt almost trivial, but it had seemed so important then. He still remembered his editor’s praise for the interviews at the local Catholic Church the Sunday after. Those notes in the box were faded and almost illegible. With a sigh, he dropped them in the trash.

Two boxes later, he unearthed another surprise—his school notebooks from his two years in London. He’d been full of dreams about revolutionizing the world with the theories he would work out with Professor Titmuss. Instead....

...instead he’d knocked up a young, exciting Indian girl.

He looked around his office. In the distance, he heard Leah’s stereo playing. His eyes fell on the picture of his family prominently framed on the wall above his desk. Everyone was smiling.

I wouldn’t change a thing, he thought, but I do wish I wasn’t so old.

The phone rang, interrupting his musings.

“Hello, darling,” Elizabeth said after he’d picked up. “How’s your Saturday of cleaning?”

“Ah.” The amused tone in her voice was unmistakable.

“Good ones, for the most part. I just found my old school books from London.”

“Those old economics books? That you always had your nose buried in?”

“The very ones. And I had to keep my nose in them. I’d have lost my scholarship otherwise.”

“True. That Marshall woman was quite cross with you.”

Chris sighed. The scholarship administrator had not been pleased to hear about the pregnancy and his changed career plans. Not at all.

Elizabeth seemed to sense his tension. Her voice pushed a note of cheerfulness. “We had such good times, then.”

“We had wild and crazy times.”

She laughed. “You loved them. We had so many adventures.”

He rolled his eyes. “I didn’t love them all. I think my tongue is still burning from that Vindaloo.”

“Oh, but I made it up to you afterward.”

“Besides,” she continued, her voice laden with innuendo, “you loved our time with Marion and Joseph.”

“Which, by the way, is related to the reason I’m calling.”

“Mmmm hmmm. We agreed that we’d talk before I had adventures on my own....”

“Well, some of Victor and Kara’s friends are here from Columbia. They want to party tonight and they said I was welcome to join them. I said I’d check with you.”

The way she slightly emphasized ‘party’ made Chris’s dick twitch even more. It had been a while....

“Well, Stacy and Jason to begin with, and Sydney and Woody. I’m not sure you’ve met them.”

“They’re both in their mid twenties. He’s rather quiet. She’s got a spark. I quite like her.”

Chris laughed. “She into girls?”

“Kara says she is. She’s quite attractive.”

He paused. The thought of her having sex with this new guy, Woody, made his gut churn a bit. But if Kara was vouching for Sydney....

“It promises to be quite a party,” Elizabeth said.

She did call and ask. He felt a momentary twang in his gut but dismissed it. “Sure. Just don’t play with Kara in front of the others, please.”

“And I want to hear all about it later.”

She chuckled. “Telling you about it will be the best part.”

“Well, maybe you can have an adventure of your own.”

He chuckled. How? Maybe discover some 1950’s sex goddess hiding in my closet with the old boxes?

“If you don’t, we’ll arrange something when I return.”

“Fun, too.” Elizabeth paused and there were voices in the background. “Well, darling, I need to go.”

Elizabeth said farewell and disconnected. Chris gently set the receiver back in its cradle and looked at the mess of notebooks splashed around him. Somehow I suspect her day is going to be a lot more fun than this.

Chris stood by the side of the pool and looked at the mid-afternoon sky. The gathering dark clouds mimicked his mood, though they were far more threatening. He’d reached a decent stopping point in his office cleaning and had planned to switch to yard work, but that didn’t look too promising at the moment.

I should’ve come up with some fun plans for today, he thought to himself, and not just chores. After all, Elizabeth’s having fun.

He sighed. He didn’t know which was worse—knowing she was off having sex with other men, or not knowing.

C’mon, you know the answer to that. Not knowing is far worse. Knowing just meant he had to deal with some minor jealousy. Not knowing—that opened up a whole set of additional issues and insecurities.

At least for him. Not for Elizabeth, apparently. She was just fine with him having sex on the side, even if she didn’t know about it. Of course, since he hadn’t, it was largely hypothetical....

That was a preview of Burst. To read the rest purchase the book.