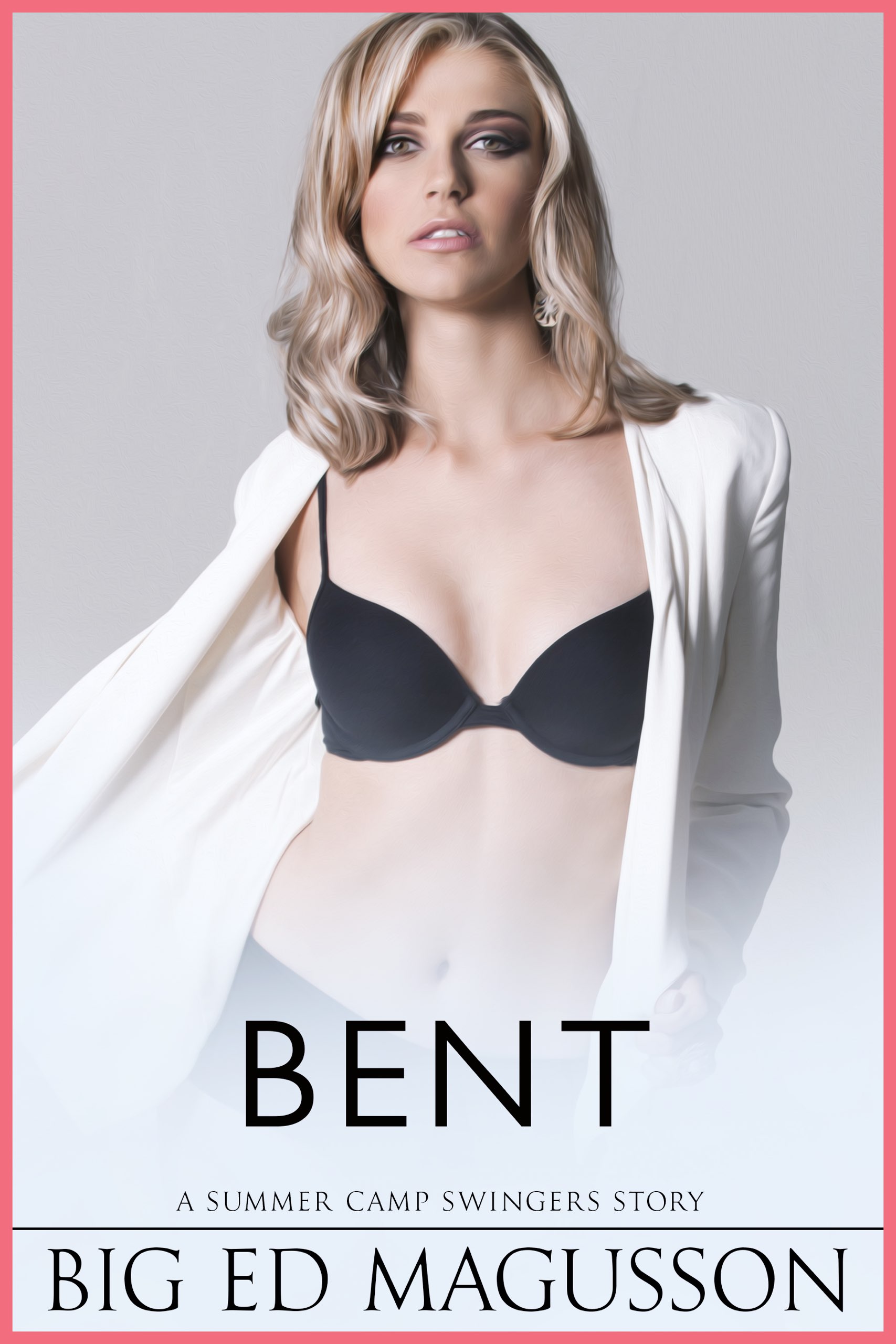 Copyright © 2010 Big Ed Magusson. Summer Camp Swingers characters and universe © Nick Scipio and used with permission. All rights reserved, including the right of reproduction, in whole or in part, in any form.

Chris Coulter let out a loud sigh as he entered the kitchen.

“The best laid plans for getting laid…” he said, grinning at his own pun. “Kara and Gina and the guys have decided to celebrate New Year’s with the Frohmans. So Elizabeth won’t get to enjoy Master Paul.”

His wife mock-glared at him from her station at the cutting board and sniffed. “If you think my sole interest in partying is Master Paul, then perhaps you need to spend some time with Mistress Elizabeth.” She looked past Chris’s shoulder as he heard footsteps behind him. “We can always leave you tied up while I play with David.”

Chris grinned as David Hughes stopped by his side.

“True,” Elizabeth said. “If he misbehaves, I’ll have to come up with a more suitable punishment.”

“If?” David said, and nudged Chris in the ribs.

Elizabeth grinned and motioned to the seat next to her, where another knife and cutting board lay. Chris took his cue and started slicing bread while David retrieved the fondue pot from the cabinet and set it up in the middle of the table. They worked in comfortable silence fixing dinner. David set up a makeshift bar on the counter. Beth finished frying the sausage and moved on to the salad.

“So,” Beth said, “are we doing anything special tonight?”

“Besides the usual fun?” Chris asked.

“Yes, besides,” Beth said. “You guys have a game planned?”

“We’ll come up with something,” David said. “Or we can wing it.”

“What about Leah and Erin?” Elizabeth asked. “Do they join us?”

Chris chuckled. If Leah got to play, she would certainly try to screw David silly. Chris realized he wasn’t the only one who thought so—Elizabeth and Beth both grinned at David as well.

David let out an exaggerated sigh. “I know. It’s a tough job, but someone has to do it.”

Chris grinned. “It’s always a tough job keeping up with a Coulter woman.”

Elizabeth pointedly ignored him. “As long as she doesn’t monopolize you this time,” she said to David.

“I’ll keep an eye on her,” Beth said, and then grinned. “Or something.” In response to Elizabeth’s raised eyebrows, she added, “She’s an attractive young woman. If she has your energy, it’ll be fun.”

Chris smiled. He truly enjoyed watching his wife and Beth sixty-nine, bringing each other to orgasm after orgasm. Wouldn’t it be fun to watch his daughter with Beth?

Elizabeth raised her eyebrow and looked at him. “We could have fun with Erin.”

“Within limits,” Chris said. He looked at Beth. “Is she still saving herself for Sean?”

Beth nodded. “He’s all she talks about.” She and David exchanged knowing smiles.

Chris chuckled to himself. How many families could openly talk about their daughter’s plans to lose her virginity? Not that being a virgin prevented Erin from having a lot of naughty fun.

They were almost done preparing dinner when the girls bounded in. Elizabeth put them to work setting the table. Leah paused when Elizabeth handed her only six plates.

“Where are the others?” she asked.

“Kara and Gina and the guys,” Elizabeth said, “are going to celebrate with Bennie and Debbie.”

“The Frohmans?” Erin looked mildly impressed. “Yeah, I guess they’ve spent a lot of time together since we got here.”

“I doubt they’ll be doing any hitting tonight,” Chris said with a grin. “Something else, but not hitting.”

Chris shrugged. “Hey, if they’re passing up our party….”

“Um… speaking of parties…?” Leah asked. “Can we be part of yours tonight?”

Elizabeth dramatically glanced at Beth before meeting her daughter’s gaze.

“Yes,” Elizabeth said, “but this is a special occasion. All right?”

Leah nodded vigorously, and then looked at David. “Um… can I…?”

David smiled. “Sure. But only because it’s a special occasion.”

Leah let out a happy sigh, to the amusement of the others.

The teenager shrugged her acknowledgement and continued placing silverware on the table.

Chris grinned. Given how loose the rules were—only touching genitals between parents and their own children was out of bounds—Erin had little reason for concern. They’d have to work to break them.

When the fondue began to bubble, David poured the wine into glasses.

“Can I have some?” Erin asked.

David and Beth held a silent conversation and then David nodded. “Some,” he said.

Erin nodded and accepted David’s glass. He mixed himself a vodka martini as a replacement.

“One for me too,” Chris said, as he passed his wine to Leah.

“When I was growing up,” Elizabeth said, “we’d have eggnog with a little rum at the holidays. Of course, my father never put much rum in Ellen’s or my glasses, but I really enjoyed the taste. Sometimes I miss it.”

“I miss cocktail hour,” David said. “Remember back in the navy days,” he looked at Beth, “how dinner parties always started with cocktail hour?”

Beth looked at him and smiled.

“We used to have Irish Cocoa,” Chris said, “once I was old enough. My mom liked it, even though I thought it was a bit sweet.”

“We have cocoa,” Leah said.

Leah choked back her next argument and took a quick sip out of her glass. Her eyes darted from adult to adult.

Elizabeth and Beth shared a silent conversation and then Elizabeth turned to the girls. “Maybe after dinner,” she said. She looked at David. “I think I’d like one then.”

With some general murmurs of assent, they dug in.

Dinner conversation was light—mostly about the day’s skiing and other adventures, but with a few stories thrown in from their pasts. Even after all these years, Chris marveled to learn new things about his friends. David talked about some of the parties they’d had back when he was in the Navy, cocktail hour and all. Beth told them about a misadventure she and her sister Ginny had gotten into growing up, involving a bottle of rum and what they thought was a hiding place their mother didn’t know about. Chris smiled in recognition and let his eyes rest on his wife. Elizabeth had been a hellion herself when they’d met and all the years had done since was channel her energy into more socially acceptable outlets.

That is, he mused, if nudism and swinging can be considered “socially acceptable!”

That was a preview of Bent. To read the rest purchase the book.