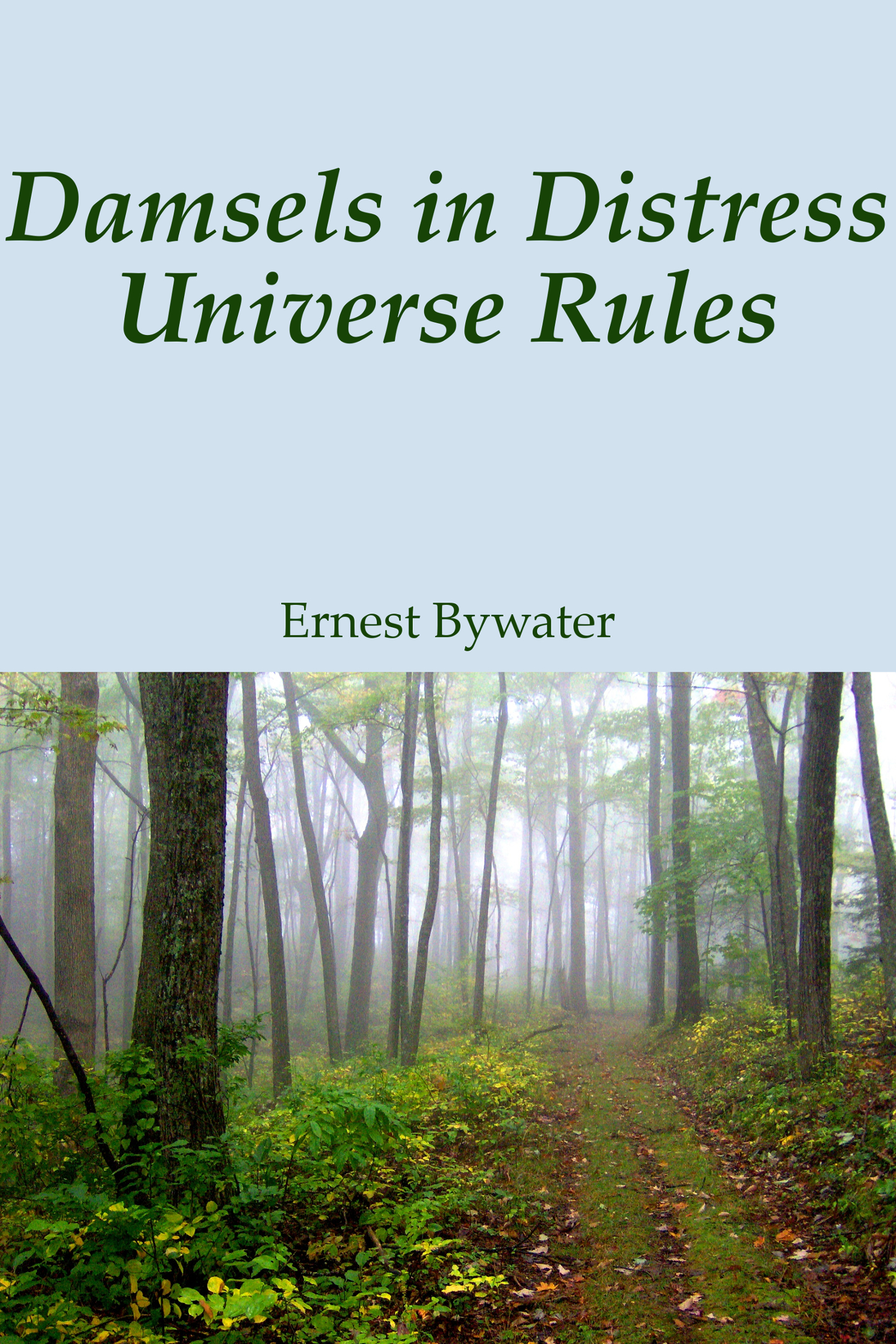 All rights reserved © 2012 by Ernest Bywater

Product names, brands, and other trademarks referred to within this book are the property of their respective trademark holders. Unless otherwise specified, no association between the author and any trademark holder is expressed or implied. Nor does it express any endorsement by them, or of them. Use of a term in this book should not be regarded as affecting the validity of any trademark, service mark, or registered trademark.

The image used is Cove Mountain Trail tn4 by Brian Stansberry, which is used with permission under Creative Commons Attribution rights. The trimming, manipulation, and adding of text is by Ernest Bywater. All rights to the cover image are reserved by the copyright owners.

The titles in use are a Chapter, a Sub-chapter, and a section.

The Damsels in Distress (DiD) universe was created by Lazlo Zalezac. It is his brainchild and he is the final arbitrator of what does and does not constitute the allowed DiD canon. He has been very free in what he's allowed so far. He also opened the universe for others to write stories in. The rules of the universe have been mentioned in various stories, and they've grown with the stories. Most of the rules mentioned here are from the stories by Lazlo, others are rules and expansions provided in stories by other authors and were approved by Lazlo. However, there are some stories set in the universe that have unapproved changes or break minor rules. Even so, most of those stories are good reading.

The bulk of the DiD universe stories are on the web site Stories on Line (SoL), storiesonline.net, and many include graphic sex scenes. Some stories do not include graphic sex scenes and are also available at SoL as well as at Fine Stories (FS), finestories.com. Most of the canon has been spelled out in the early DiD stories at SoL, and much of this has been repeated in the early Chaos Calls stories set in the DiD universe so the information is there for those reading them on the FS site.

The basic concept is women from the planet Cassandra travel to the planet Chaos to place themselves in danger, then a man from Earth comes and rescues them. After the rescue they go to Crossroads and have sex until the woman is pregnant. Crossroads is an administration centre, and each Earth Hero involved has a female assistant / co-ordinator there.

There are four worlds used in the main universe - Earth, Crossroads, Chaos, and Cassandra. There is a spin off series that uses another set of portals going to another section of Crossroads then to another world, this is not part of the main DiD canon and rules, but it has not been ruled out, either. You need to read the relevant stories for the rules of that planet, if you're interested in it. Those stories are on SoL in the DiD story list.

The planet of Cassandra was involved in a war some centuries earlier than the stories are set in. There were DNA changes in the men and women of Cassandra as a result of after-effects of some of the weapons used. It's almost impossible for the men to get the women pregnant, and they all reach orgasm very quickly during sex. The weapons' effect on the men is sending them mad with a form of dementia. Thus, very soon after the war the men were unable to handle any form of leadership role. All Cassandrans have a much longer lifespan than the people of Earth do, and the women are attractive to males from both Earth and Chaos.

Crossroads is a facility on a habitable moon near the spatial centre of the triangle formed by Earth, Cassandra, and Chaos. The portals and rules were established along with a very powerful computer to manage the details. Humanoid staff interface between the people and computer.

The computer keeps all data and provides all of the services. It's voice activated and able to create real objects then teleport them to where you are: food, furniture, clothes, etc. The medical technology heals broken bones, stab wounds, etc. in minutes, but it won't fix existing issues like cancer, amputations, etc. Around 2011 (Earth time) the computers were upgraded with the addition of a number of Artificial Intelligence (AI) controllers for each major function along with a co-ordinating AI.

Originally the staff members were all from Cassandra. A humanoid supervisor from another world is brought in around 2011 (Earth time) to provide more control and better management of the facility.

The universe was started in 2005 and the stories are set with Earth as the modern day Earth because this simplifies many aspects of the story. There is no reason why a story can't be set in an earlier historical period of Earth, but you'd need to be aware of the developments that it pre-dates. The current canon has the system being in use for some hundreds of years plus the recent changes. Also, the information provided has the system being established during Earth's 13th Century with the people transplanted from that time. The system was operational soon after that.

Chaos is basically a medieval world with all the smells, diseases, and disadvantages that go with such a period of civilization. It also has the brutality of an entrenched feudal system where might is right and the winner takes all of the property of those they defeat.

It's a single planet created by the repetitive collisions of spatial objects adding to the mass over time from an unknown number of meteors and asteroids colliding together. Terra-formed by aliens with an atmosphere created using gases and fluids released from the frozen rocks of the planet in the process and then more suitable gases added by the aliens. A vapour cloud was added to hold in the heat and to mitigate harmful solar radiation. The aliens decided the climate was best suited for the flora and fauna of Earth, so they were transplanted. Some did well while others didn't survive. Why some didn't do as well as the others is heavily researched, but not clearly identified, so it's still unknown as to why.

People and culture were added by transplanting early thirteenth century Earth villages and farms from England, Europe, Asia, and the Steppes of Russia. Their homes, shops, animals, and crops were put in various locations around the planet. The churches, priests, and upper echelons of their political system were not transplanted. Religion was removed from their memories and the idea of feudal lords who lived elsewhere but seldom bothered the general population was planted in the peoples' minds. The common language is English like it was used then, and now it's like the English in use on Earth today.

In general the people of Chaos have no curiosity and accept many odd things like extra people coming out of banks and people taking animals into banks them disappearing. This lack of curiosity also means they don't think about or question their existence or the universe. They are a very pragmatic people who usually accept things as they are. Most of the people are as smart as the average modern humans, maybe smarter in some cases. From time to time there are people who are more intelligent and a bit more curious, but they're an exception and not the rule.

Over many generations something in the local minerals altered the people and removed the spark of creativity. So the planet still dwells in a middle ages society. Now it's much like the western culture of the USA in the mid 1800s, but with little metal and no guns or explosives. Another change is Chaos men have a burning feeling during sex with Cassandran women, and the pheromones of Cassandran females cause certain men from Chaos to irrationally want to possess them. However, they're very frustrated by their inability to mate with them without the burning.

When Chaos was linked to Earth a dampening field was set around the planet to prevent propellants or explosives like gunpowder from exploding. Most Earth flora and fauna now survive when taken to Chaos.

There were changes made on Chaos due to the effects of the wars of which the Slaver War in General Sid is one part, the changes are ongoing. Chaos did have one dangerous natural mineral removed by the new AI computer when they found out about it. The AI replaced the mineral with an equal tonnage of iron ore, plus some other useful minerals and sands in the same areas. The finding and exchange of the mineral occurs in Shiloh. The total amount of iron ore is not that high. Native deposits of nickel of reasonable sizes are also found. However, few of the people recognise the nickel as a usable metal, and fewer know how to use it.

The everyday welfare of people on Chaos is slowly rising from a few centres of improvements created by some Earth Heroes who establish bases to operate from. In doing so they introduce better ways of doing things to help 'their' people, and those improvements slowly flow out to the rest of the people living on Chaos.

Investigations found the women of Cassandra can breed with the men of Earth, so the aliens' social scientists developed a system to use Earthmen to impregnate the Cassandran women. The struggles and efforts of the Damsels assures their children will be cherished and not taken for granted, while the efforts and sacrifices of the Heroes assures they're impregnated by the best men available. This provides a slow shift of power from the Cassandran people to the Earth - Cassandran people. The Heroes are Cassandran cult idols, but they can't travel to Cassandra. The rescues by the Heroes provide an emotional and physical outlet for many of the best men on Earth. Also, it's hoped the interaction with the people on Cassandra, Crossroads, and Chaos will prepare a core group of leaders to face meeting aliens visiting Earth in a sane and safe manner at some future time.

The Cassandran women who have a very high probability of getting pregnant enter a lottery to be placed on a list to go to Chaos. There is a limited number of women sent to Chaos at any one time, this varies as per a complex algorithm used by the computer on Crossroads. Once the women are in dangerous situation the men from Earth go to Chaos to rescue them. After the rescue the man impregnates the woman during an interlude on Crossroads, then he returns to Earth for a week to a few weeks before he can visit Chaos again.

The system keeps the population relatively stable while letting the human male hybrid children to mature, expand, and gradually move into positions of authority, rather than create a civil war between the Human half-breeds and the fully Cassandran population. It's an attempt to find only the strongest and most determined women to conceive and raise the children. The system is a kind of self-imposed Darwinian approach by using survival of the fittest to produce the strongest children. It applies selective breeding concepts to the population increase while providing fertile cross-breed males over a long time-frame.

The involvement with Cassandran women in support roles on Crossroads adds incentives to some of the Earthmen to keep returning to do their best to make the rescues on Chaos.

That was a preview of Damsels in Distress Universe Rules. To read the rest purchase the book.