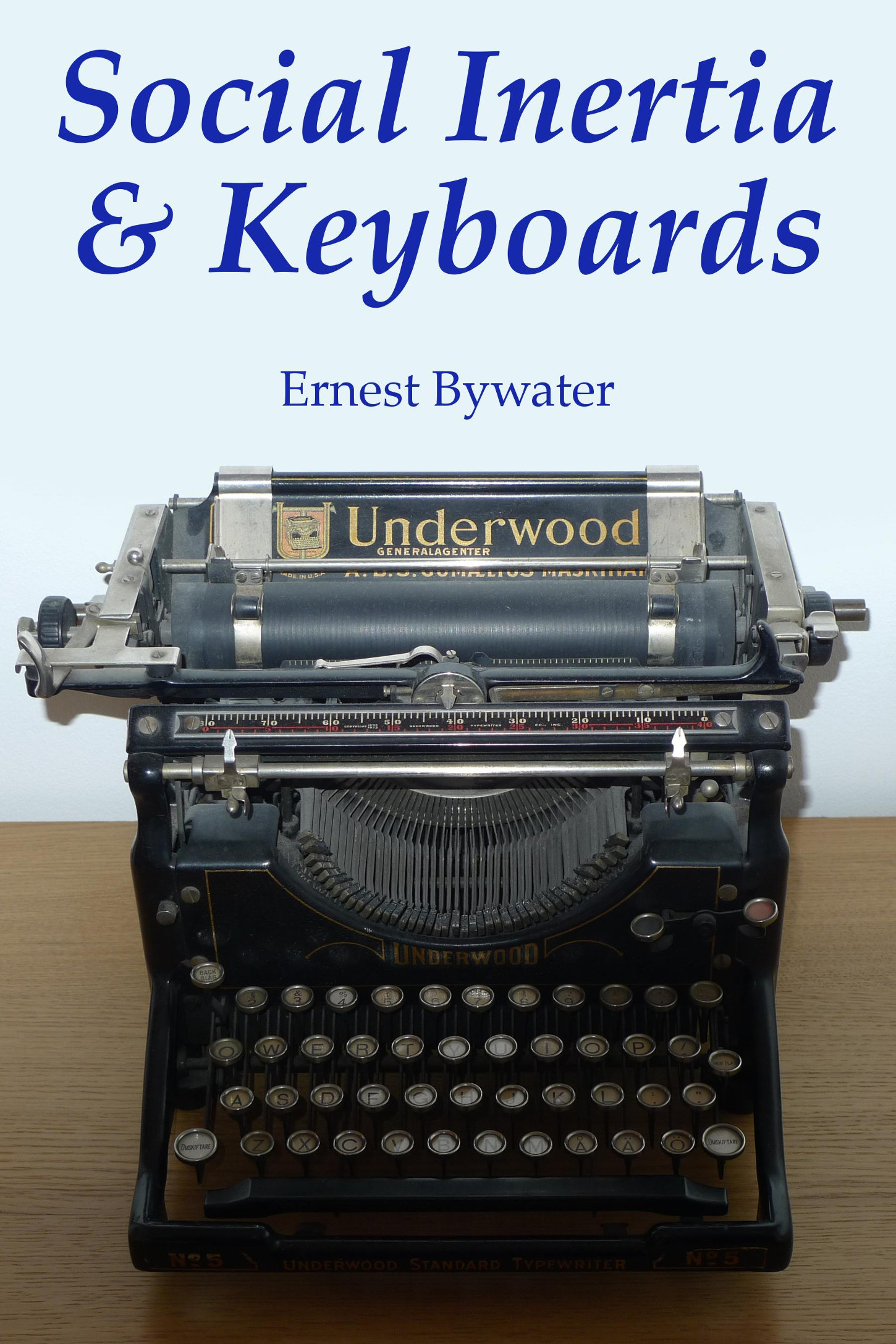 All rights reserved © 2011 by Ernest Bywater

Product names, brands, and other trademarks referred to within this book are the property of their respective trademark holders. Unless otherwise specified there is no association between the author and any trademark holder is expressed or implied. Nor does it express any endorsement by them, or of them. Use of a term in this book should not be regarded as affecting the validity of any trademark, service mark, or registered trademark.

The above is my default copyright statement which I'm too lazy to remove when it's not applicable, like in this booklet.

The image used is 1920s_Underwood_SE_Layout.jpg by Anonimski and is in the public domain. The trimming, manipulation, and adding of text is by Ernest Bywater. All rights to the cover image are reserved by the copyright owners.

The titles in use are a Chapter, a Sub-chapter, and a section.

What is Social Inertia

Social Inertia is the situation where a culture, society, or group of people don't make any changes because they're too committed to, or too familiar with, doing things the way they have been done in the past. In short, they do it that way because they always did it that way and they don't want to change how they do anything at all. Change for change's sake is not good for a group, either. However, there are times when a change can lead to better things by saving time or other resources, or it results in a better product or whatever it is that's being done. Some past good changes were the switch from a hunter-gatherer way of living each day to an agricultural lifestyle providing a more constant food supply.

The sad fact is much of how things are done today are not done in the best way possible because of the social inertia of some people being unwilling to change. Many changes introduced in the last one hundred years have taken decades to be done due to the need to train the new generations in the new ways. Also, many people accept the situation of both the old and the new ways being done side by side until all of those wedded to the old way of doing things are either dead or have left the workplace. Another problem has been change forced on the larger group to meet the special needs of a small group, a change that has made life harder for the general group for no real benefit to the full society. Due to these issues there are many people who do not accept any change unless the need is well proven and they agree with the need for the change.

When a possible change is identified it's usually evaluated and then a suitable method looked at. Sometimes such a change is seen as not possible and it's then forgotten, despite later events making it possible.

Over the last fifty or sixty years one of the biggest changes to society, as a whole, has been the development of technologies, processes, and systems that are now called Information Technology or IT. The creation of computers and software programs have had a tremendous influence on the work and the daily lives of people in many ways. It's hard to think of any other historical change that has affected life so much.

The biggest areas of change created by the IT industry have been:

1. Communications: in many ways IT has made worldwide communications instantaneous and it has greatly reduced the risk of being misunderstood through the use of more uniform methods and terms of communications.

2. Workplace efficiency: IT has had such an effect on the workplace that a few people can now do work that previously required hundreds to do. Also, the electronic storage has reduced the space needed to store information records.

3. Recreation: in this area most people think of computer games, but it also covers things like emails, phone calls, the speed of delivery of written mail and packages (bar code and postcode readers) as well as sharing files and videos. We mustn't forget the switch from vinyl records to DVDs, CDs, and portable players like MPEG devices, etc.

Considering the effect IT has on daily life now you would expect the leaders of IT development to be at the forefront of making changes to improve life, especially in the workplace. This is the case in some areas, but not all of the other possible areas. The areas where IT has not made the required changes is often due to the problems with introducing those changes, and the main problem there is social inertia. A significant area of non-change has been the design of the computer keyboards. To understand why keyboards have not had the needed widespread changes requires a good look at how they were developed and their history.

The History of Keyboards

For many centuries all documents were hand written, this took a lot of time to make the documents, and those who wrote them also took a long time to train. There was the problem with writing styles and about how well they could be read by others at a later date. The invention of the typewriter allowed people to prepare documents regardless of how well they wrote, and it was a lot faster to type a document than to write it while the documents were also much easier to read. At first many styles of keyboards were designed, but the one that became most common was designed by Christopher Sholes in the 1870s and known as the QWERTY keyboard after the first six letters of the second row. Sholes went through a few design layouts before he settled on the final one that was in the typewriter design he sold to Remington. Due to the popularity of the Remington typewriter it became the standard. Typing schools were created and they used the popular Remington typewriters. Since the typists were trained to use this layout other typewriter manufacturers changed their layout designs to match the Sholes design because it was easy to improve their sales if the already trained people could use them; this reason comes into play a lot of times with later keyboard layouts.

That was a preview of Social Inertia & Keyboards. To read the rest purchase the book.