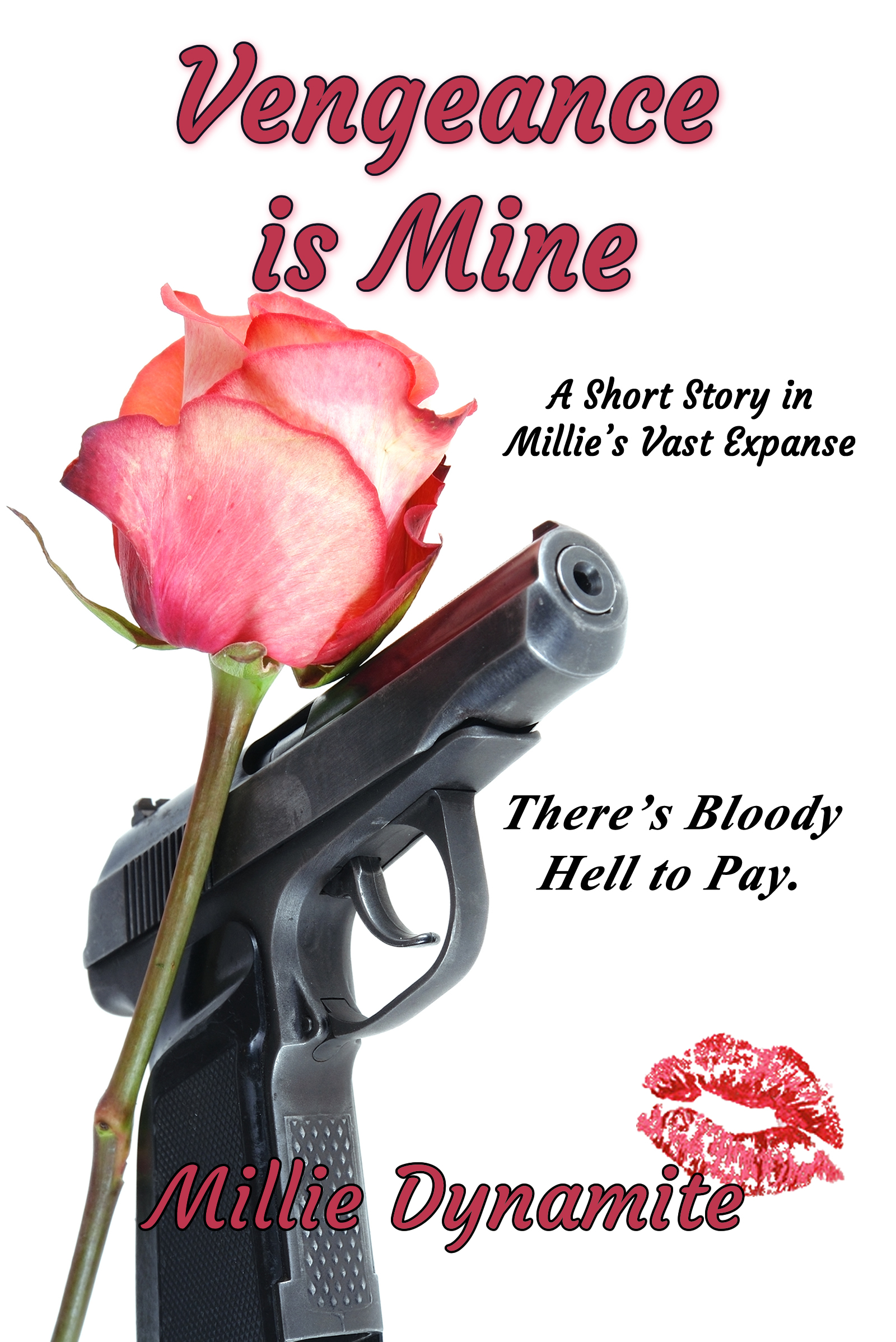 A Vengeful short story in

This eBook license is for your personal enjoyment only. This eBook is not authorized for resale and may not be for a given away to other people. If you would like to share this book with another person, please purchase an additional copy for each recipient. If you’re reading this book and did not purchase it, or it was not purchased for your use only, then please return to an online retailer of EBooks and purchase your own copy. Thank you for respecting the hard work of this author.

NOTE: This work contains material not suitable for anyone under the age of eighteen (18) or those of a delicate nature. This is a story and contains descriptive scenes of a graphic sexual nature. By reading this eBook, you assert that you comply with your local or state laws. This book is purely a work of fiction. Names, characters, places, and incidents either are the product of the author’s imagination or are used fictitiously. Any resemblance to actual persons, whether living, deceased, actual events, or locales are entirely coincidental. Historical characters are used strictly for dramatic purposes.

In Millie’s Vast Expanse, not every tale has a happy ending – not all lives are sunshine and rainbows. Demons walk among us. They move in the shadows, watching, waiting for the opportunity to devour those they can. Sometimes the most brilliant minds have the darkest thoughts. Sometimes the scales can’t be balanced through the system. Sometimes people with the best of intentions take justice into their own hands.

Offered up for your approval, the life and times of one Elizabeth “Shortcake” Dyer, a woman slight of stature, with an enormous intellect who pursues retribution with a dogged determination that would make a bulldog proud. A deeply scarred woman who never wallowed in self-pity but channeled her rage into helping others. When she ran into brick walls in the pursuit of justice, she manufactured vengeance. After all, vengeance has its own sufficiency.

Hattori Hanzo: Revenge is never a straight line. It’s a forest, And like a forest, it’s easy to lose your way... To get lost... To forget where you came in.

“For as long as I can remember, well, since that day in June of 1968 anyway, I have wanted justice for me. If not justice, then vengeance … for me … for my pain … yes, my pain needs to end. I don’t know if I can ever find peace as long as he is still out there somewhere – alive.

“I remember those horrible screams of my brother crying, pleading for mercy. Those bastards showed James no compassion. Most of the men are just blurs, but the one they called Boss, I remember him. I can’t get his image out of my mind … not even now after all these years,” she said, fidgeting around on the couch. Sitting up, she looked at the doctor, “This was a mistake.”

“It takes time to make progress,” the doctor scratched some notes on her pad. “Why did you wait almost twenty-four years to seek help on this?”

“It could,” the doctor said as she straightened her skirt. She looked at MS Dyer, concern on her face. Elizabeth wondered how genuine the appearance was.

“At a hundred-fifty dollars per hour, I suppose it could matter…” standing, Elizabeth moved toward the door.

“I want to help you,” Doctor Proctor said.

“I don’t think that is a truthful statement … you know, it’s my profession to sniff out liars,” she said, opening the door as she hesitated. “You, Doctor, are a liar. I shan’t be back. Bill me whatever you think your time has been worth,” Elizabeth told her, pulling the door closed. She would have to hurry to get back to court. She figured Monday would be closing arguments, no hope that it would help. As soon as his lawyer smelled the blood in the water, any hope of a deal went out the window.

“Gil,” Elizabeth said into the phone. “No, sir, it didn’t go well …” she waited as he talked, “We’re losing this one. I’m certain … the victim didn’t help at all … I think he got to her.” She again listened while he talked. “No, I don’t blame her … you can’t help but fear a man like him, and he did put her in the hospital. When the collected evidence was thrown out, we lost the case … at that minute, well, hell as soon as she heard about it at least … she knew he would be free and walking around … she just couldn’t or wouldn’t finger him as a matter of self-preservation.”

“Look, Shortcake, don’t blame yourself,” he wanted to say more but didn’t know what to say. He talked on for a few more minutes trying to let her know it wasn’t her fault. He knew that it didn’t matter.

Hanging up the phone, she looked at her watch. Time to get out to the boat. Maybe two days of fishing would cheer her up, though not with her real purpose for going out there with – him – with Mike. He would tell her he was running away from it all. They would fight, and it would suck. If he stayed, it would never be the same between them. She couldn’t forget, she couldn’t forgive, she had never been able to forgive the wrongs.

The smog hung heavy over the city, fouling the air as the boat made its way out of the Marina, heading for open water. A big cabin cruiser slides through water smooth and straight. The pilot held her course; she watched the horizon. Her eyes darting around, looking for dangers. Picking up her ever-present cup of coffee, she sipped it carefully, after all, coffee had to be hot.

“I don’t know why you wanted to come along,” the man said from behind her as he worked on his rod and reel. “You don’t even like fishing that much.”

“The hell I don’t,” Elizabeth said, “I don’t like fishing with you. You aren’t a patient man when you fish. You aren’t persistent at anything you do.” She added the latter statement with a mixture of regret and anger in her voice. Gaining control, she continued, “I wanted to talk, I want you to change your mind. You’re throwing so much away, Mike, just pissing away what we have built.”

“I’m not changing my mind,” Mike told her. Standing, he took the rod to the back of the boat and placed it in a holder. “I want us to go out a long way, past the casino ships. Where the water’s cold and the Whites swim,” he sat down on the seat where he had been before, getting comfortable.

“Well, it’s your funeral,” Elizabeth said, laughing afterward. “Seriously, dear, we can work this out, it’s a bump in the road, nothing more, no need for such drastic measures. Your dalliance with trash shouldn’t be the end of our marriage.”

“Oh, Liz, first it isn’t drastic, nor is it rash. I didn’t wake up this fine March morning and decide this.” Pulling a cigarette from his pocket, he tamped it down on the case. Lighting the smoke, he looked at her. He felt sad, this can’t be easy for her. “This isn’t the end, it’s just a break. I’ll get this new venture going well – once everything is right, well talk. I can see Rene on school breaks, holidays, and such. I’m not going to divorce you, not yet, and perhaps not at all. Second the ‘dalliance,’ as you put it, isn’t the reason.”

“If you leave me, and this Gabriela person is with you,” she turned her eyes to him, glaring at him with angry daggers thrown from her eyes to his. “You will never see Rene again.”

“You don’t understand, Shortcake. I love her … and I love you. Elizabeth, darling, you can love more than one person,” Mike said, sucking in the smoke. “You have to admit you’re obsessive about your work, you have a monomaniacal fixation with – justice – or at least the pursuit of justice. It’s hard to live with someone that fanatical.”

“So, your infidelity is my fault,” Elizabeth said.

“I didn’t say that,” Mike said, laying back blowing smoke rings, shooting one ring after another through the center of the preceding one. Pulling back the throttles, she stepped away from the console. Turning to him, she folded her arms and tapped her toe. He knew she seethed with anger as he had seen this all too often. Yet another reason to put distance between them.

“You picked a fine time for this shit,” Elizabeth told him, her voice hard and hateful. “I have a case that will go to the jury early next week. I’m going to lose that case in a spectacular fashion. As a result, a horrible rapist will go free.”

That was a preview of Vengeance is Mine. To read the rest purchase the book.

Add «Vengeance is Mine» to Cart